How To Survive An Attack 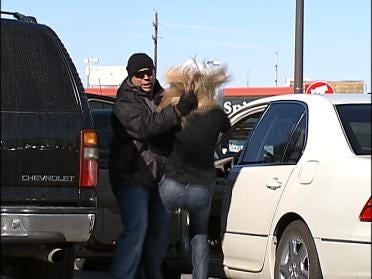 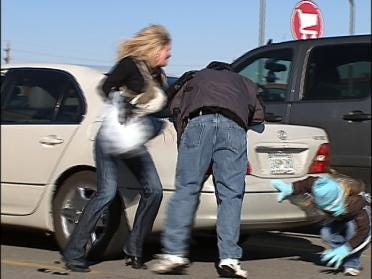 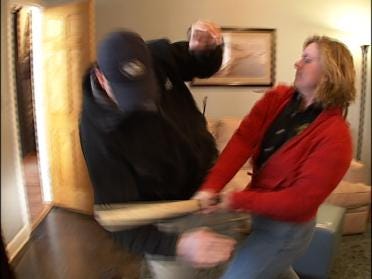 Crime can happen in any community.  First and foremost, you should try to avoid an attack by running and screaming to escape.  But, sometimes, you have no choice but to fight back.  News On 6 crime reporter Lori Fullbright reports there are ways you can fight back without any special training or equipment.  It is knowledge that could save your life or the life of your child.

The experts at the U.S. Shooting Academy helped re-enact three real life scenarios, two in parking lots and one in a home.

In the first example, a woman was in her car and talking on her cell phone when she was approached by a man demanding her purse and keys.

What made the victim vulnerable was she was focusing on her phone call rather than her surroundings.  Because of that, she couldn't lock in on a threat that was approaching her and that made her easy pickings.

If the carjacker took her car, her daughter, who was already buckled inside, could be dead.

The scenario is very different when she does something as simple as putting away the cell phone and looking around.

"Are you excited about going to Ashton's birthday party today? Go ahead and buckle up," the mother asks her daughter.

"Give me your keys!" demands the suspect.

Because the woman saw the threat coming and trained her daughter to get out of the car and run for help, the situation changes.

The woman used whatever she had in her hands as a weapon.  In this case, it was a sack filled with items she purchased in a store, but it was enough to stop the attacker.

"There is almost always a weapon of opportunity.  There's a bag or object to throw strike or distract with," said Mike Seeklander of the U.S. Shooting Academy.

The second scenario involved a woman who had to strap her child into a car seat.  That can be a very vulnerable time for anyone.

A suspect approached demanding that the woman give him her keys.

Once he has the keys, he has her car and the baby strapped inside.

The woman wasn't on the phone, but didn't bother to look around.  Like most victims, she didn't believe something like that could happen to her.  Again, she failed to lock in on the threat.

Each action should trigger awareness.

"Those mental triggers, when I put a child in the car seat, everything I do, when I click a buckle or open a door, I'm going to look around," advised Mike Seeklander of the U.S. Shooting Academy.

Again, when the mother stays alert to her surroundings, understanding she is responsible for her own safety, the outcome of this scenario is very different.

"Give me your keys," demands the suspect.

Although she had nothing to hit him with or throw at him, she used the hardest parts of her body:  knees, hands and elbows to attack the softest parts of his body:  groin, throat and eyes.

You must do everything possible not to get knocked down or knocked out.  And, always use your body's natural alarm system:  your scream.

"If you're quiet, that's a problem. People will never recognize you're being attacked," advised Mike Seeklander from the U.S. Shooting Academy.

In the final example, a woman and her child are at home when a suspect forces his way into their home, after she answered the door.

At home, you should again be aware of your surroundings.

If someone rattles your doorknob, take it as a threat.  It is a pre-attack signal.  If you hear breaking glass, know you likely need to get out of your home.

A family should have a plan of action.

In the example, everyone must know the plan which could include going to a pre-selected safe room.  Perhaps, the child will know it's her job to grab the phone while the mother grabs something to serve as a weapon.

At this point, you must become the aggressor.

"I said I wasn't going to hurt you, now come here," urged the suspect.

"Get back. Get back.  Get back," warned the woman.

"Get a plan together and you'll be fine. Panic is not going to control you. You control it," said Mike Seeklander of the U.S. Shooting Academy.

If the situation comes down to a fight, you have only one option.  You must win.

Talking about the plan and practicing it are key.  Many people worry practicing will scare their kids.  Think of it this way, fires are scary and can even be deadly, but every school teaches and practices fire drills and it saves lives.  The same applies with personal safety.

Tulsa's U.S. Shooting Academy is the only one like it in the country. And, they teach all kinds of classes for all ages.  If you want to go beyond basics of self defense and learn how to use pepper spray, Tasers or guns, they teach that, too.

How To Survive An Attack