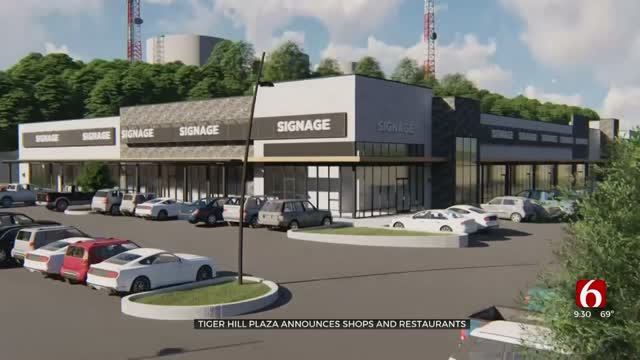 BROKEN ARROW, Okla. - The developers of Tiger Hill Plaze have now given insight into which shops are to come after construction is complete.

The shopping center at 71st Lynn Lane is now under construction.

The developers of Tiger Hill Plaza say they're excited to bring more businesses to this busy intersection, and businesses say they can't wait to open.

A new rendering shows what Tiger Hill Plaza will look like when construction is finished next year.

The 30,000 square foot retail center will soon be home to several different restaurants and stores.

Steve Walman and Neil Bhow are partners on the project.

"This area and this intersection fundamentally have always been a strong commercial corner," Walman said.

Crews started pouring slabs for the foundation earlier this week.

Now, the developers are announcing the places that will be setting up shop here, too.

Tacos 4 Life Franchise Partner Mike Pierce Jr. said they're ready to get started in the high-profile area of Broken Arrow.

"We're excited to have a patio and drive-thru out there," Pierce said.

Tiger Hill Plaza is across the street from Chick-Fil-A, Reasors, and other businesses.

Walman said the steel is on the way, so people could see the buildings for Tiger Hill Plaza go up quickly.

He said they're finishing up negotiations for six other businesses, and still have a few openings.

"Several with national tenants, several local tenants, so we have the kind of mix we think works well in a community like Broken Arrow," Walman said.

They believe they'll have the grand opening in the early part of next year. Walman said they hope it'll coincide with the winding down of COVID-19.