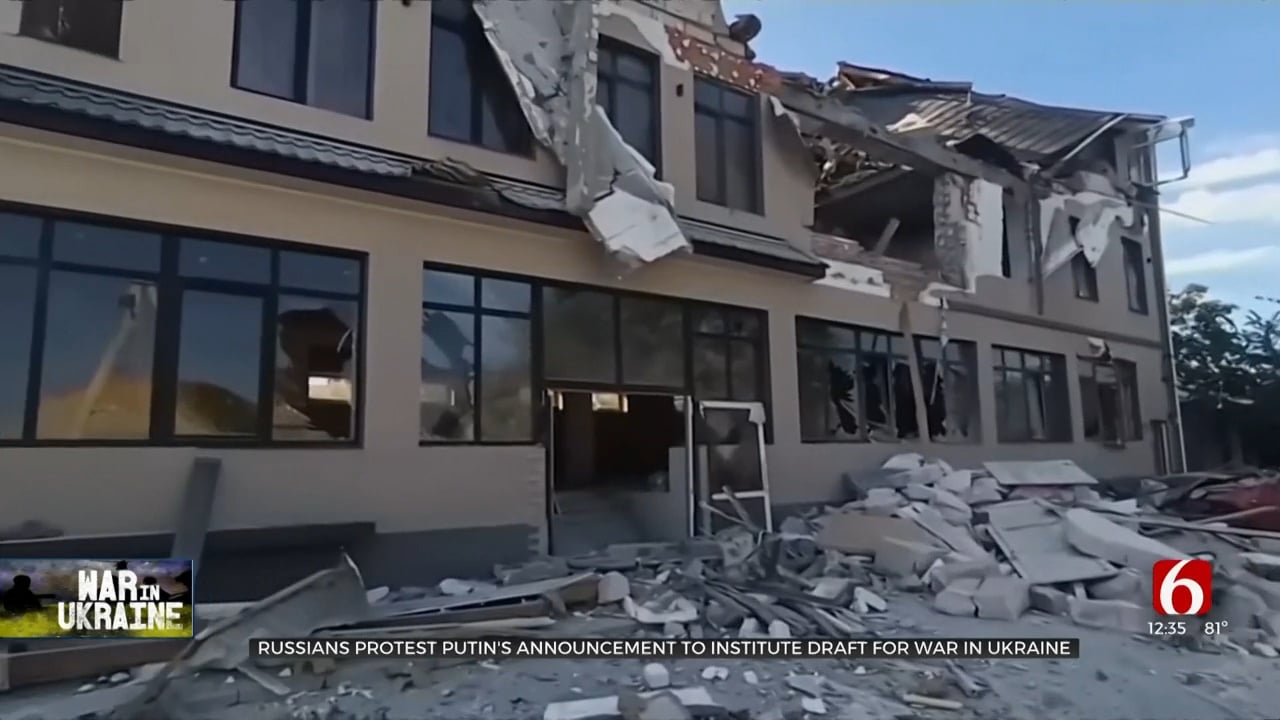 Long lines of cars on roads snaking to Russia’s border crossings with Georgia, Kazakhstan and Mongolia, and similar queues at airports.

Angry demonstrations — not just in Moscow and St. Petersburg — but in the remote far north province of Yakutia and in the southern region of Dagestan, with women chasing a police officer and shouting, “No to war!”

A gunman who opened fire in an enlistment office in a Siberian city and gravely wounded the military commandant, saying, “We will all go home now.”

Five days after President Vladimir Putin announced a partial mobilization to call up hundreds of thousands of reservists to fight in Ukraine, the move has triggered outraged protests, a fearful exodus and acts of violence across the vast country.

“Panic. All the people I know are in panic,” said David, a Russian who gave only his first name out of fear of reprisals, in an interview with The Associated Press at a border crossing with Georgia. “We are running from the regime that kills people.”

While the Kremlin had wanted to promote its orchestrated referendums in occupied parts of Ukraine as a joyful event, with those regions expected to join Russia in a move similar to the annexation of Crimea in 2014, it instead is dealing with instability and chaos at home.

State-run rallies were held in Moscow and other cities celebrating the referendums even before the the conclusion of several days of balloting that has been denounced as pre-ordained, phony and illegitimate by Kyiv and the West.

In his address on Wednesday announcing the mobilization, Putin said the Kremlin would “support” the regions of Donetsk, Luhansk, Zaporizhzhia and Kherson in their push to be incorporated into Russia.

But the mood in Russia has been anything but festive.

Fears are running high that Moscow might close the borders to men of fighting age after the referendums in Ukraine end, prompting long lines of cars at Russia’s frontiers. Telegram chats dedicated to some of these crossings swelled with thousands of new users.

The lines apparently persisted Monday. The online service Yandex Maps showed a 18-kilometer traffic jam on a road in Russia’s region of North Ossetia that leads up to the border with Georgia, and the regional branch of the Federal Security Service, or FSB, deployed an armored vehicle to the crossing.

Officials told Russia’s RBC news site that the action came “just in case the reservists want to break through the (border) checkpoint and leave the country without completing any border formalities,” promising not to restrict any exits.

“Call-up notices are being served to everyone. Nobody knows who will receive one tomorrow and therefore we decided with friends for the time being to rest in a beautiful country,” said Roman Isif, a Russian who crossed into Larsi, Georgia, in an interview with AP.

Long queues and crowds were reported Sunday in at least two of four Moscow airports. Tickets to destinations still available to Russians after the European Union halted all direct flights – such as Turkey, Armenia, Serbia and Dubai – have been sold out for days, despite exorbitant prices.

Russian media — including state-run outlets — reported Monday that border guards have started turning men away at the border, citing mobilization law. It wasn’t immediately clear how widespread the practice was.

Although state television painted a rosy picture of the mobilization drive, with Russia 1 TV on Sunday showing crowds of eager men lining up to enlist “in almost every region,” the reality was different.

Enlistment offices and other administrative buildings have been set on fire since the start of the call-up. Although such incidents, usually involving Molotov cocktails, have been common during the 7-month-old invasion, they have grown in number and frequency after Putin’s speech.

Russian independent news outlets counted at least 17 such incidents in recent days, on top of 37 before the mobilization was announced.

A man walked into the enlistment office in the Siberian city of Ust-Ilimsk and opened fire, shooting the military commandant at close range.

Russian media reported the man, identified as Ruslan Zinin, 25, was upset that his best friend who didn’t have any combat experience was called up. Authorities have said such experience would be the main criteria for the mobilization.

Zinin, who was arrested, reportedly said, “No one will go fighting,” and “We will all go home now.” His victim was hospitalized in intensive care in an “extremely grave” condition, the reports said.

Also on Monday, a man at a bus station in Ryazan, a city about 200 kilometers southeast of Moscow, reportedly doused himself with a flammable liquid and set himself on fire, shouting he didn’t want to take part in Russia’s “special military operation” in Ukraine. He reportedly sustained minor injuries and was detained by police.

As troubling as these incidents are, it is the spread of protests to far-flung strongholds of Putin’s base of support that could be more concerning for the Kremlin, with women confronting authorities about “taking our sons.” Although the mobilization was said to total about 300,000 men, some media reports claim the authorities plan to muster more than 1 million, which Moscow denied.

Even though initial demonstrations against the mobilization were brutally suppressed by police, with hundreds detained shortly after it was announced, more have broken out in various regions. Over the weekend, women rallied against the call-up in the remote province of Yakutia in Russia’s far north.

In Mahachkala, the capital of the predominantly Muslim province of Dagestan, a crowd of women in headscarves gathered Sunday, chanting “No to war.” Some of them chased a police officer away from the protest, while others stood in front of a police car, preventing it from moving and demanding the release of detained protesters inside.

Protests in Dagestan continued Monday, with demonstrators clashing with police. Outrage also spilled into the streets of another North Caucasus region, Kabardino-Balkaria. Video showed a crowd of women surrounding a man in a suit, identified by the media as a local official, with one screaming: “Do you know where you’re sending him?” — an apparent reference to someone close to her being mobilized.

Dagestan, as well as the Siberian region of Buryatia, are among several regions where there are complaints that a disproportionate number of ethnic minorities have been deployed to fight and have died in Ukraine.

“For our state, we are not its citizens, but cannon fodder in this war. Just a resource,” said Pavel, a 40-year-old resident of Buryatia who fled to Mongolia last week to avoid getting called up. He spoke to AP on condition that his last name not be used, fearing retribution.

“Siberia and the Far East are being actively sold — timber, minerals, land leased for 50 years. And it turns out that people living here are also processed as a resource,” he added.

Given the atmosphere of instability and Russia’s recent battlefield setbacks, the referendums in Ukraine are unlikely to have any influence on public opinion, he said.

“No one needs these referendums – not the Russian public, not even the patriots anymore,” Gallyamov added. aid.

Andrei Kolesnikov, senior fellow at the Carnegie Endowment for International Peace, pointed out that polls indicate about half the Russian people unconditionally support the war, with about a third whose backing comes with caveats.

The latter constitutes “a reservoir of doubt and discontent,” Kolesnikov told AP. “It is already clear that the mobilization is not partial, and if this becomes more and more obvious, then the mood may begin to change. Putin is taking a big risk.”