Sooners Win Slugfest Over No. 4 Texas 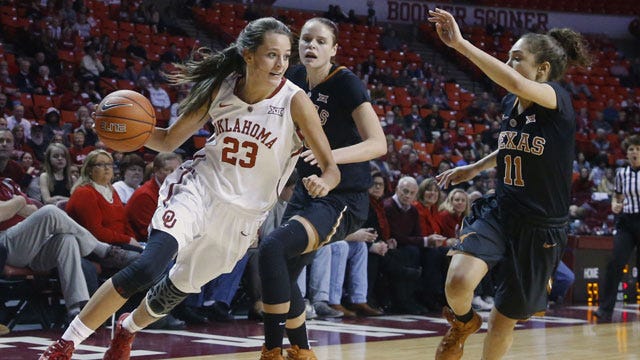 The youth and inexperience of the Oklahoma women's basketball team was on display in the nonconference season. As the Sooners tried to find their way and establish an identity, the losses piled up.

Now, the wins are beginning to pile up for the Sooners, as Oklahoma ran its winning streak to five games Wednesday night with a 70-59 win over No. 4 Texas.

Since the end of December, all those lumps the Sooners took in the first month and a half of the season are turning from blisters to calluses. There's no question the experiences from November and December made the Sooners tougher and on Wednesday against the bigger Longhorns, Oklahoma was the tougher team.

The game was not for the faint of heart, as neither team shot 35 percent from the field. Both teams grabbed over 40 rebounds, and there were 48 fouls called. But in a game that was tightly contested, the Sooners did everything just a bit better than Texas to come up with their first win over a top five opponent since a 2009 win over Baylor.

The Sooners are still young, but it was that youth that led Oklahoma on Wednesday, as a trio of sophomores—Maddie Manning, Peyton Little and Gioya Carter—gave the Sooners enough on offense to push OU over the top. Manning finished with a team-high 14 points while Little had 13 and 10 rebounds. Carter played just nine minutes due to foul trouble, but still managed to score 11 points.

Nneka Enemkpali led Texas with 21 points and 16 rebounds. Brady Sanders was the only other player in double figures for the Longhorns, finishing the game with 12 points.

Texas led by as many as eight in the first half, but the Sooners closed the half with a 15-4 run over the last four minutes to take a 31-28 lead into the locker room. Oklahoma continued to build on the positive momentum, going up by 11 with 12:38 to play.

Texas wouldn't go quietly. The Longhorns rallied by rolling off a 9-0 run over the next three minutes to cut the deficit to 44-42 in favor of OU.

That was when freshman Gabbi Ortiz hit the first of two big shots for the Sooners. On the possession after Texas cut the OU lead to two points, Ortiz buried a deep 3-pointer to push the lead back to five. While it was hardly a dagger—9:27 remained on the clock—it was the momentum-changer the Sooners needed. Texas never got any closer.

The Longhorns did draw within three points later in the half, but another Ortiz jumper helped the Sooners preserve the lead and allow Oklahoma to put the game away at the free throw line.

The first month and a half of the season wasn't the easiest for Oklahoma, but the lessons learned are paying huge dividends for the first-place Sooners.

Sooners Win Slugfest Over No. 4 Texas