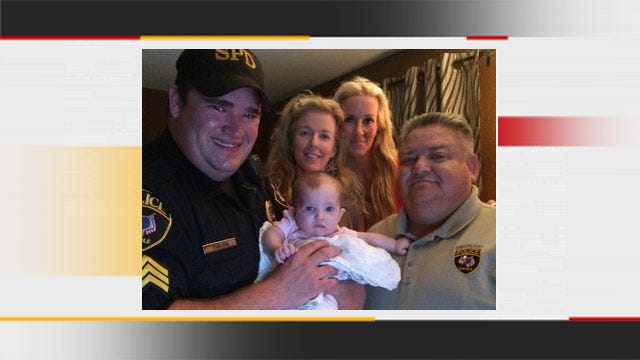 For more than 13 hours, authorities from Oklahoma and surrounding states searched for a five-month-old baby girl abducted just outside Cashion. The Amber Alert was canceled after the baby was found with her great aunt in Texas. News 9 got answers to some lingering questions surrounding the case.

About 1:30 am Friday, the search was called off, and now investigators are sifting through the aftermath of what now appears to be a false report.

“We are being fed misinformation on purpose at times, so that the women could make it to Texas where the paperwork would stand up,” Kingfisher County Undersheriff Bryon Blankenship said.

The baby's great aunt, Cindy Findley and Jennifer Skousen said they had a letter signed by the baby's incarcerated mother giving them permission to take her. However, News 9's legal analyst Irvin Box said it doesn't matter what state the paperwork was signed in - it's not valid.

“It’s going to take a court order through a guardianship or a juvenile awarding the child to DHS or something of that nature, but you can’t just get rid of a child or give permission to someone by writing on a piece of paper and having it notarized that you can take my child,” Box said.

As far as authorities are concerned, nobody has legal custody of five-month-old Olivia Smith.

“There is no judge anywhere that has signed paperwork giving anyone custody of this child,” Blankenship said.

So who does have custody of her? Box said whenever a child's parent is behind bars, the parent still has legal custody of their child.

“Anybody that goes to prison can say you can keep my child while I’m there, and as long as there are no issues that occur during that time, then everything is ok,” Box said.

“This was an orchestrated plan,” Blankenship said.

Still, the incident cost not only Oklahoma, but as many as four other states, hours of manpower and thousands of dollars in taxpayers money.

“If they said false information or caused it to be said to the sheriff to give an Amber Alert out, they could be charged with a false report to the police," said Box. “They could be civilly held liable for the cost of the Amber Alert and all the expenses surrounding that.”

Either way, baby Olivia was missing and, most importantly, was found safe and sound.

“We have an abduction of a child. It doesn’t matter who does it, whether it’s a family member,” said Blankenship. “Custodial abductions are just as dangerous as any other type.”

As of Friday afternoon, News 9 was told nothing in this case has been turned over to the Kingfisher County District Attorney for criminal charges.