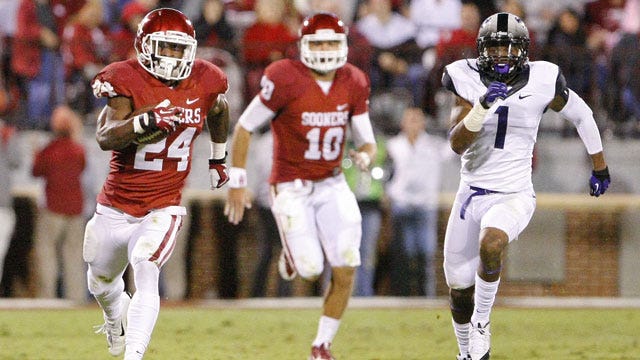 Thanks to the Oklahoma Sooners' dramatic win over Oklahoma State in Bedlam, the Sooners will face Alabama in the Sugar Bowl on Jan. 2. Monday, coach Bob Stoops, along with seniors Gabe Ikard and Aaron Colvin, met with the media to discuss the upcoming matchup withthe Crimson Tide. Here are some news and notes from the press conference.

• The Sooners are a big underdog against the Crimson Tide in this game. Most places have Alabama favored by 15 points. Colvin said he never thought he would be such a big underdog when he came to Oklahoma in 2010. Stoops said that while the Sooners have won the past two games as underdogs on the road, he's not a fan of always being an underdog. "I'd rather be favored by 28 points every week," Stoops joked.

• Colvin said Alabama wide receiver Amari Cooper is very comparable to the elite Big 12 receivers he has gone up against over the years, citing his speed and great hands.

• Colvin played most of Bedlam with a turf toe injury and actually left the game on crutches after the Sooners' win. Colvin said he was getting better, but needed the extra time before the bowl game to get completely healthy.

• The end of Bedlam was feisty to say the least. Colvin said the Sooners had some fun with it all after "hearing it all day from the OSU fans."

• Colvin said one of the keys to the game for the OU defense will be to stay disciplined on play-action fakes. The Crimson Tide have a dominant rushing attack and are terrific with play-action and hitting plays over the top to Cooper and the other wide receivers.

• As for other OU injuries, Stoops said both Trevor Knight and Jordan Evans have returned to practice. However, he said offensive linemen Adam Shead and Tyrus Thompson would most likely miss the bowl game.

• Ikard talked a lot about the positives that can happen for the Sooners if Oklahoma wins or plays a close game with the Crimson Tide. Ikard also said there wasn't much, if any, downside to this game, thanks to the national perception that Oklahoma is going to get blown out.

12/12/2013 Related Story: Lots To Gain, Little To Lose For Sooners Against Alabama

• Ikard said the Sooners have already looked at the tape of Auburn's win over Alabama several times in order to help figure out ways to establish the run against the Crimson Tide. Ikard said it would be a very long night in New Orleans if the Sooners didn't figure out a way to run the football against Alabama.

• Ikard and Stoops both said they have seen a lot of exciting things from some of the younger players in practice this past week. Ikard said the pre-bowl practices are huge for the younger players to get repetitions and lay the groundwork for battling for playing time the next spring and summer.

• Stoops said he didn't know that AJ McCarron was planning on coming to Oklahoma before changing his mind on National Signing Day.

• Stoops also talked about his friendship with Alabama coach Nick Saban, a friendship that began when Saban was at Michigan State and recruited the high school where Stoops' father was an assistant coach.

• Stoops, predictably, said the decision of who would start at quarterback for OU in the bowl game would be a "game-time decision." He said pre-bowl practices would be a big part of how that decision is made.