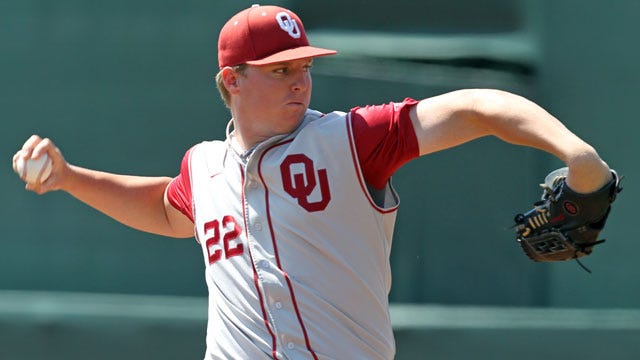 Gray took a perfect game into the seventh inning and gave up just one run on two hits. The right-hander had a career-high-tying 12 strikeouts for the third game in a row and walked none. He improved to 5-1 this season with the victory.

Oklahoma (24-4, 4-0 Big 12) got on the board early with three runs in the first inning. After the Sooners extended their lead to 4-0 in the fifth, Kansas (14-9, 2-2 Big 12) scored one in the seventh but could not get any closer. OU responded with eight runs in the final two innings.

The Sooners opened with a three-run first inning, thanks to a towering home run from Oberste. The hit extended his hit streak to a school-record 28-straight games. Jack Mayfield was hit by a pitch to lead off the ballgame before Max White hit a one-out single through the left side to set up Oberste. The designated hitter sent the first pitch he saw into the trees beyond the left field fence.

Four-run innings in the seventh and eighth for OU broke the game open. The Sooners sent nine runners to the plate in each inning. Kolbey Carpenter drove in three of the eight runs, while Craig Aikin plated two. Each inning began with Anthony Hermelyn, who had two hits and one run on the night.

In the seventh, after Kansas got their first hit and run of the game the previous half inning, Hunter Haley scored Hermelyn after he led off with a double. An Aikin sacrifice fly scored scored Garrett Carey and White singled to bring home Haley. The inning's final run came courtesy of Carpenter, who singled to send White in.

All four runs in the eighth came after the first two OU batters recorded outs. A Mayfield triple scored Haley, and an Aikin single scored Mayfield. With the bases loaded, Carpenter singled up the middle to plate Aikin and White.

The series between the Sooners and Jayhawks resumes Friday at 6:30 p.m. before the series finale Saturday at 2 p.m.