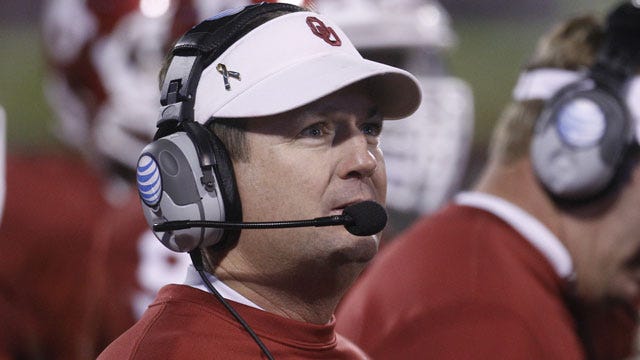 When the Oklahoma Sooners wrapped up a solid but unimpressive 10-3 season by getting blasted in the Cotton Bowl by Texas A&M, Sooners fans everywhere howled.

The arguments for change came swiftly and forcefully: Bob Stoops should be fired; OU is getting lapped by too many programs in the recruiting game; certain assistants need to be let go. Some of the arguments were legitimate, others not so much, but the consensus among fans was it would take a lot for Bob Stoops to actually initiate change in a program defined by loyalty and solidarity.

While Stoops may have been preaching a message that he was happy about the direction of the program, his actions the past two offseasons have indicated that is certainly not the case.

Before last season, Stoops had never fired an assistant coach. Now, including last season's firing of secondary coach Willie Martinez, Stoops has fired four coaches in two years. Technically, Martinez and Patton were allowed to find new positions, but if you think that's not a firing, you're kidding yourself.

Only running backs coach Cale Gundy, defensive ends coach Bobby Jack Wright and co-offensive coordinators Josh Heupel and Jay Norvell remain from the Sooners 2011 coaching staff. What's more, Gundy and Wright are the only ones who were on Stoops' original coaching staff in 1999 and have been in Norman ever since.

Sooners fans wanted some changes. Instead, they got a complete overhaul.

Not that an overhaul is a bad thing. Changes certainly needed to be made. The defensive line had become ineffective on the field and on the recruiting circuit, the Sooners haven't exactly been reeling in big catches at defensive tackle. However, it seemed to be a genuine surprise to OU's newly signed class that Shipp had been fired.

Kittle's firing was the one that made the biggest statement. Kittle and Stoops played together at Iowa and were on the coaching staff until Kittle left for the law world in 1986. They're close friends, and Stoops gave Kittle a shot at OU after Kittle had been a lawyer, high school coach and a minister. For Stoops to fire a good friend of his, that shows he's really serious about removing complacency from the program.

It will be interesting to see how these changes affect the program, but the undeniable fact is these coaching changes will affect the direction of the Oklahoma program for the foreseeable future, which is why Stoops needs to be very careful with whom he chooses to replace his fired assistants.

Now is the time for the Sooners to infuse the program with some new blood, particularly the younger, exuberant type. Coaches who have proven themselves to be excellent coaches, but more importantly, excellent recruiters, would be ideal. Hire a guy who can coach but not recruit very well, and we might be talking about that coach's firing in a couple of years. Hire a guy who can recruit but can't coach and, well, we'll see what happens.

Changes had to be made, and change can be good. However, change is only good if the new is an improvement over the old. That's the pressure Bob Stoops is under now. Make the right changes and OU could return to national title contention every season. Make the wrong decisions and the empty, disappointed feeling OU fans have felt after the past two seasons will only continue, and probably get worse.