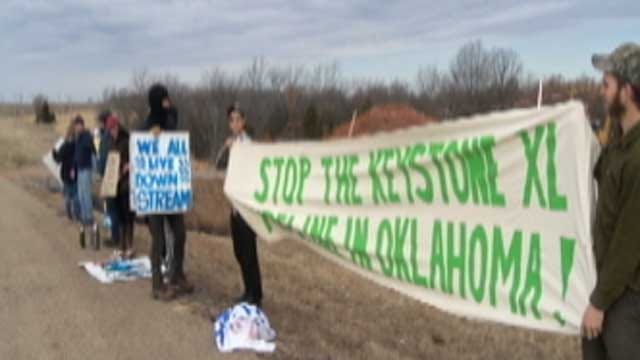 An early morning protest on Monday shut down work on the Keystone XL Pipeline in Okfuskee County after a group entered a worksite before crews arrived. One woman's actions landed her behind bars at the Okfuskee County Jail.

Construction crews showed up to work on the Keystone Pipeline Gulf Coast Project only to find a group of men, women and children standing in their way. Elizabeth Leja actually chained herself to an excavator.

Leja was arrested and taken to jail after the incident. She posted bail late Monday afternoon and told News 9 she was proud of what she did to shine a light on the problems she has with Keystone XL Pipeline coming through Oklahoma.

Leja and the others said they worried the pipe could leak tar sands into Oklahoma's waterways and reservoirs. They pointed to a disaster in the Kalamazoo River in Michigan where a pipeline cracked, then spewed the thick tar sands into the water. The cleanup process was slow and difficult because the tar sands sunk to the bottom of the river. The pipeline has some people like Elizabeth Leja worried about the "what-ifs" and how it could impact Oklahomans if something were to go wrong.

Keystone spokesman, Jim Prescott told News 9 the company was confident in the safety of the pipe in Oklahoma, saying so far, there have been no leaks or cracks. He released the following statement in response to Monday's protest:

"Those who continue to oppose construction of the Keystone Pipeline Gulf Coast Project are attempting to stand in the way of 4,000 of the best pipeline workers in the world who are on schedule to complete the pipeline in mid-2013 so it can start operations by the end of the year.

They have not delayed overall construction and the crew involved in today's protest is back at work.

This morning's incident was another example of our commitment to put the safety of workers and protesters ahead of pipeline construction. Our procedure is unchanged. When a pipeline crew confronts protesters, the crew stands down and notifies its supervisor. The supervisor assesses the situation, and, if the supervisor has reason to believe those involved in the protest are trespassing and may be committing a crime, law enforcement is contacted.

TransCanada does not direct law enforcement activity, but if our experience in Texas is any guide, these individuals will be arrested and charged appropriately.

It's worth mentioning that in Wood County, Texas, TransCanada reached a settlement with 19 named individuals and three organizations that resulted in a permanent injunction barring them from taking specified actions.

Basically, they are prohibited from doing the very thing we saw today – physically chaining themselves to equipment or in any way impeding TransCanada's access to the right of way. Although the order is effective in Texas and Oklahoma, it is only applicable to the named individuals and organizations."