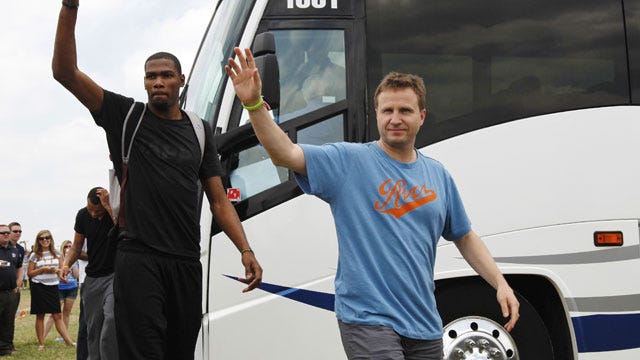 The Oklahoma City Thunder announced Monday that head coach Scott Brooks and general manager Sam Presti have agreed to terms and the head coach has been locked up in a multi-year contract.

The Thunder has continued to improve under Brooks in the past three seasons, improving their win percentage gradually each year, as well as claiming the second most victories (152) over the span. Additionally, Oklahoma City has advanced deeper into the posteason, reaching the NBA Finals in 2012.

"Continuing with Scott as our head coach is extremely significant for the future of our organization," said Presti. "He has been integral to our success and we have a deep appreciation for his tireless dedication to our players' development."

Brooks is the 16th head coach in franchise history, taking over for P.J. Carlesimo in the 2008-2009 season after a 1-12 start. In his first full season on the sidelines, Oklahoma City pulled off one of the most severe turnarounds in NBA History, winning 27 more games in 2009-2010 year to finish 50-32.

"I would like to thank Clay Bennett and Sam Presti for the opportunity to continue with the Thunder," said Brooks. "Oklahoma City is a special place and I'm eager to build upon the foundation and culture of this franchise for years to come."

The Thunder can now turn its attention to their offseason plans, dealing with Derek Fisher, Royal Ivey and Nazr Mohammed, who all became unrestricted free agents at season's end.