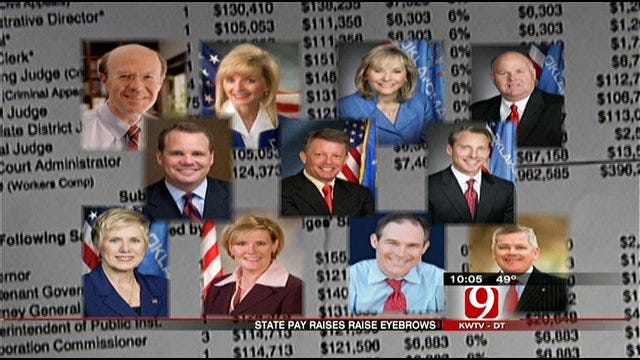 It's been six years since state employees have gotten a raise, but now many of the highest paid officials in the state are slated for a big bump in pay.

Kevin McDonald has been a teacher for 15 years. During that time he's gotten a pay raise from the state twice. The most recent was back around 2006.

"To constantly have to re-evaluate: is this enough? Can we do what we want to do for a living and support our family, does wear on you."

But now, judges on the Oklahoma Supreme Court and in districts across the state, all who make more than a hundred thousand dollars a year, are slated for a 6% raise effective July 1st.

By statute that means the salaries of 11 state elected officials and 27 district attorneys who also all make more than $100,000 will also get a 6% raise.

"I was appalled when I found out that they were looking to get eight to ten thousand dollar annual raises when that's roughly half of what my constituents earn in an entire year."

That's why Rep. Inman along with both Republican and Democratic leadership in both the House and Senate have filed a resolution to stop the raises from taking place.

Inman says he believes most lawmakers will agree it's the right thing to do. Especially when those like Kevin and his wife, who is also a teacher, are struggling.

"We have to find additional sources of income to support our family the way we would like to," said McDonald.

Last week, State Superintendent Janet Barresi said she wouldn't take the raise. Governor Mary Fallin and some of the others down the list have said they would do the same.

If that resolution passes, Governor Mary Fallin would have to sign it, disapproving her own raise.