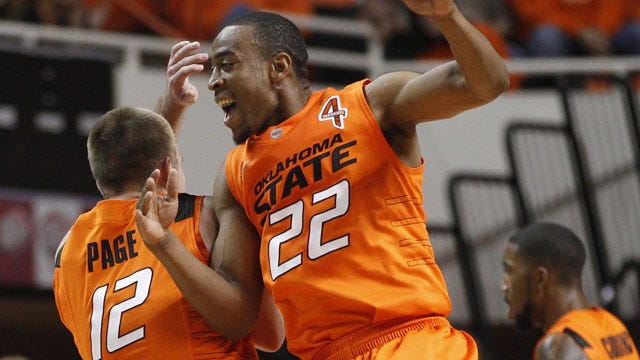 STILLWATER, Oklahoma – The Oklahoma State men's basketball team had to mount a second-half comeback, but managed to avoid an upset in a 72-67 win over Missouri State Wednesday.

The teams stayed close for most of the first half, until Missouri State went on a 15-4 late in the half to take the advantage. The Bears led at halftime, and then built that lead to as much as 12 points in the second half before OSU began its comeback.

The Cowboys came alive with a 17-2 run to tie the game, but Missouri State did not back down. The Bears responded with a scoring spurt of their own to open a lead again, and the game stayed close for the rest of the night.

Trailing by one point with less than 90 seconds left in the game, Missouri State attempted a 3-pointer that missed. OSU made a free throw on its next possession, but missed the second to keep it a two-point game.

Instead of going for the tie, Missouri State attempted another 3-pointer on the ensuing possession. That one also missed, and MSU was forced to foul after that. The Cowboys made three of their final four free-throw attempts to put the game away.

The free-throw line turned out to be the Cowboys' saving grace. The two teams had nearly identical stat lines, except that OSU went to the charity stripe 41 times. The Cowboys made more free throws (31) than Missouri State attempted (26).

Freshman Le'Bryan Nash led the way for OSU with 19 points off the bench. Keiton Page scored 15, and Jean-Paul Olukemi added 13 points and a team-high nine rebounds.

Kyle Weems led all scorers with 24 points and Jamar Gulley scored 19, but not other Missouri State player scored more than seven points. The Bears went cold from beyond the arc, going just 6-of-22.

The Cowboys now have won their last three games, but those include this five-point win against Missouri State and a three-point win against Tulsa. The schedule will get much harder in their next outing, when they travel to Madison Square Garden to face No. 15 Pittsburgh – OSU's first ranked opponent of the season – at 1:30 p.m. Saturday.