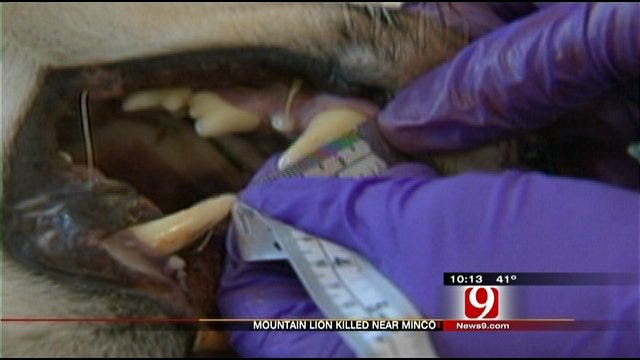 MINCO, Oklahoma -- Last week News 9 told viewers about coyotes getting closer to the metro. Now, it seems another wild beast may be on the move.

A 130-pound mountain lion showed up along a central Oklahoma highway on Tuesday.

Experts at the Department of Wildlife say they are lucky if they can confirm even one sighting a year and hardly do they have the chance to get a look at one up-close. On Wednesday, they got that chance.

"There are not a lot of mountain lions in Oklahoma," said Micah Holmes of the Oklahoma Department of Wildlife. "It's a big animal."

Biologists examined the adult male mountain lion after a car hit and killed it on central Oklahoma highway.

"We were able to get some basic biological measurements such as DNA samples," said Holmes. "We're able to pull a tooth … and cut it in half, put some dye in it and age that animal just like a tree."

The Grady County Game Warden picked up the lion after someone spotted it lying along the road.

The mountain lion was found along Highway 81 in Minco near the South Canadian River. Wildlife experts say it's common to find animals near bodies of water.

"Mountain lions will use rivers as travel corridors because that's an area where there's lots of game," said Holmes.

This year, Oklahoma has had three confirmed mountain lion sightings, which is a lot of sightings for one year according to the department of wildlife. One of those sightings was a story News 9 brought you in April of a mountain lion spotted in the backyard of a Tulsa home.

Wildlife experts say they are not sure why more mountain lions are being spotted this year. They also say there has never been a mountain lion attack on a human in Oklahoma, and they believe this animal was traveling alone.

The Oklahoma Department of Wildlife urges anyone who spots a mountain lion to call and let them know.