Texas Investigators Travel To Oklahoma For Help In Cold Case 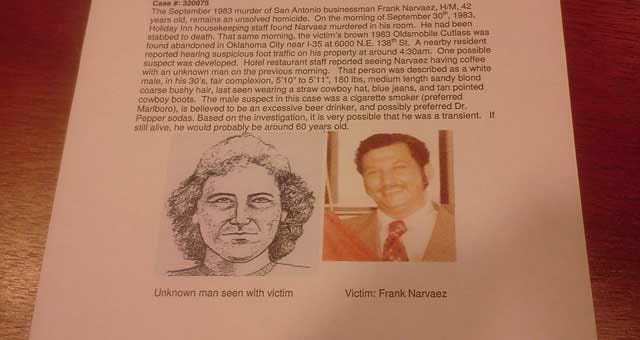 EDMOND, Oklahoma -- A group of investigators from across the state converged on Edmond's Forensic Science Institute. They are putting their resources and minds together to help solve a 28 year old cold case out of Denton, Texas.

The victim, Francisco "Frank" Narvaez, of San Antonio, was found murdered in his room at a Denton, Texas Holiday Inn on September 30, 1983. He had been stabbed to death. That same morning they found his brown 1983 Oldsmobile Cutlass abandoned near I-35 and N.E. 138th Street in Oklahoma City.

We will bring you the latest on the description of who investigators are looking for Thursday on News 9 at Four.

Texas Investigators Travel To Oklahoma For Help In Cold Case