Report: BYU To Join Big 12 If OU Remains In Conference 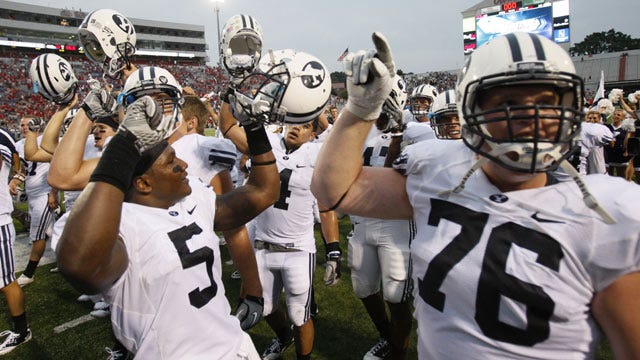 PROVO, Utah -- According to BYU-Football.com, recently independent Brigham Young Cougars would accept an invitation and join the Big 12 when and if Oklahoma will pledge its commitment to the conference.

BYU had long been rumored to be one of the frontrunners for a spot in the conference left by Texas A&M's eventual departure, as well as the possibility of the conference dissolving. Reports surfaced Tuesday that the University of Arkansas had been contacted about joining the Big 12, but no progress was made.

The move to potentially add the Cougars comes the day following the SEC announcing that they would be adding Texas A&M, pending the remaining Big 12 schools pledging not to pursue legal action. However, in the same release it was announced that at least one Big 12 school was unable to let the Aggies leave and had threatened to sue both the conference and commissioner Mike Slive. Later Wednesday, it was learned that eight current Big 12 schools would not agree

The Cougars competed in the Mountain West Conference from 1999-2010, before officially becoming a Division 1-A Independent in July of 2011. While competing in the Western Athletic Conference for more than 30 years, BYU claimed one National Title in 1984 under head coach LaVell Edwards.

According to the report, the move could be announced as early as Saturday.

Report: BYU To Join Big 12 If OU Remains In Conference