WEB EXTRA: Tornado Moves Across I-35 East Of Edmond WEB EXTRA: Cars, Semis Blown Off The Road On I-40 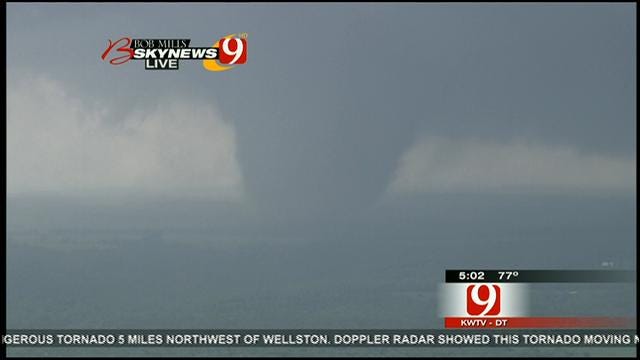 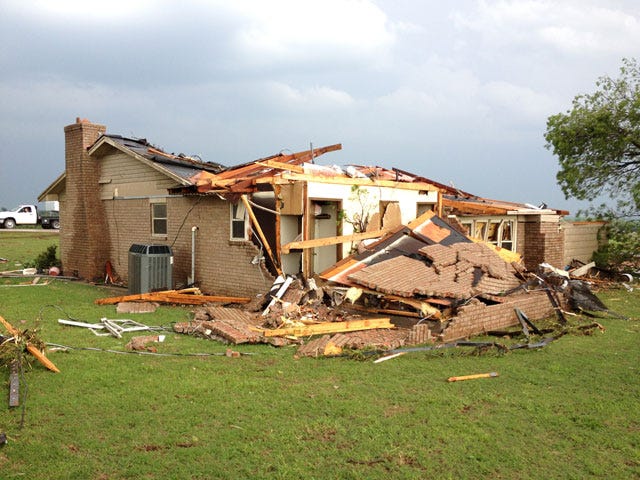 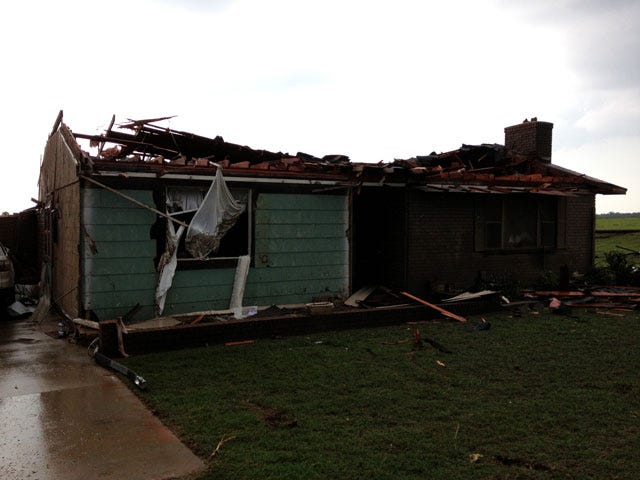 The first tornado touched down near 15th St. between Coltrane and Bryant in the city of Edmond. Damage and debris was reported by News 9 storm chasers. Scanner reports indicate damage in the Thornebrook housing area. One home had its 2nd floor ripped off. However, EMSA says no injuries have been reported in Edmond at this time.

"Mercy Edmond I-35, our facility under construction in Edmond, sustained damage from today's tornado including broken windows and roof damage. All utilities have been shut off. No one was on site at the time the tornado hit. No one has been injured."

Go to the News 9 Weather Page

Multiple power flashes were visible as the tornado moved through the area. Over 3,000 OG&E customers were without power after this tornado rolled through, about 1,100 in Edmond and about 2,400 in north Oklahoma City.

That tornado was moving east northeast, toward Interstate 35 in the direction of Lake Arcadia.

A second tornado touched down at Post Rd. and 2nd. St. east of Edmond and I-35. Not much damage was reported with that tornado.

A third tornado touched down about a mile and a half north of Luther approaching the small towns of Wellston and Carney. Debris was reported and circulation was observed as being about a half a mile wide. Preliminary reports suggest this twister may have been an ef-4 or even an ef-5.

About 1,000 OG&E customers in Wellston reported power outages. Carney, Okla. was directly in the path of this tornado. Multiple homes sustained heavy damage. Some injuries have been confirmed. It is not clear how severe those injuries are at this time.

A fourth, and very large tornado touched down east of Norman, forming a waterspout over Lake Thunderbird on the north, northwest edge of the lake. Several power flashes were seen, but just over 200 customers around the Norman reported power outages.

The most damage sustained in Cleveland County occurred on Indian Hills Rd., between 168th and 192nd streets. The Cleveland County Sheriff's office has confirmed that deputies were called to rescue people from their homes in that area. No word yet on injuries.

This tornado moved toward the city of Shawnee.

The Oklahoma Highway Patrol shutdown Interstate 40 and highway 102 near Fire Lake Grand Casino because of the tornado near the Shawnee area. Heavy damage was reported near Homer Ln. and highway 102, south of the casino. Multiple vehicles overturned on I-40 near highway 177.

Several injuries and at least one fatality have been reported in trailer park that was completely destroyed, east of highway 102 on Independence. Some residents may have even been trapped in the damaged homes. That trailer park has been identified as Steelman Estates.

EMSA is responding to the scene in Bethel Acres, near Shawnee, with three units and three supervisors to assist with the injuries.

Another tornado was reported to have touched down east of Shawnee near the town of Prague. No word yet on damage or injuries associated with this tornado.

The declaration can be amended to add additional counties if conditions warrant.

"Our hearts and prayers are with those Oklahomans who have been affected by today's severe weather," Fallin said.  "The state of emergency declaration will allow state agencies to help expedite the delivery of resources to local jurisdictions to aid with the cleanup and recovery from today's storm."

Under the order, state agencies can make emergency purchases and acquisitions needed to expedite the delivery of resources to local jurisdictions. The declaration also marks a first step toward seeking federal assistance, if necessary.

The Red Cross says that volunteers will be out on Monday morning doing more damage assessment and providing mobile feedings.