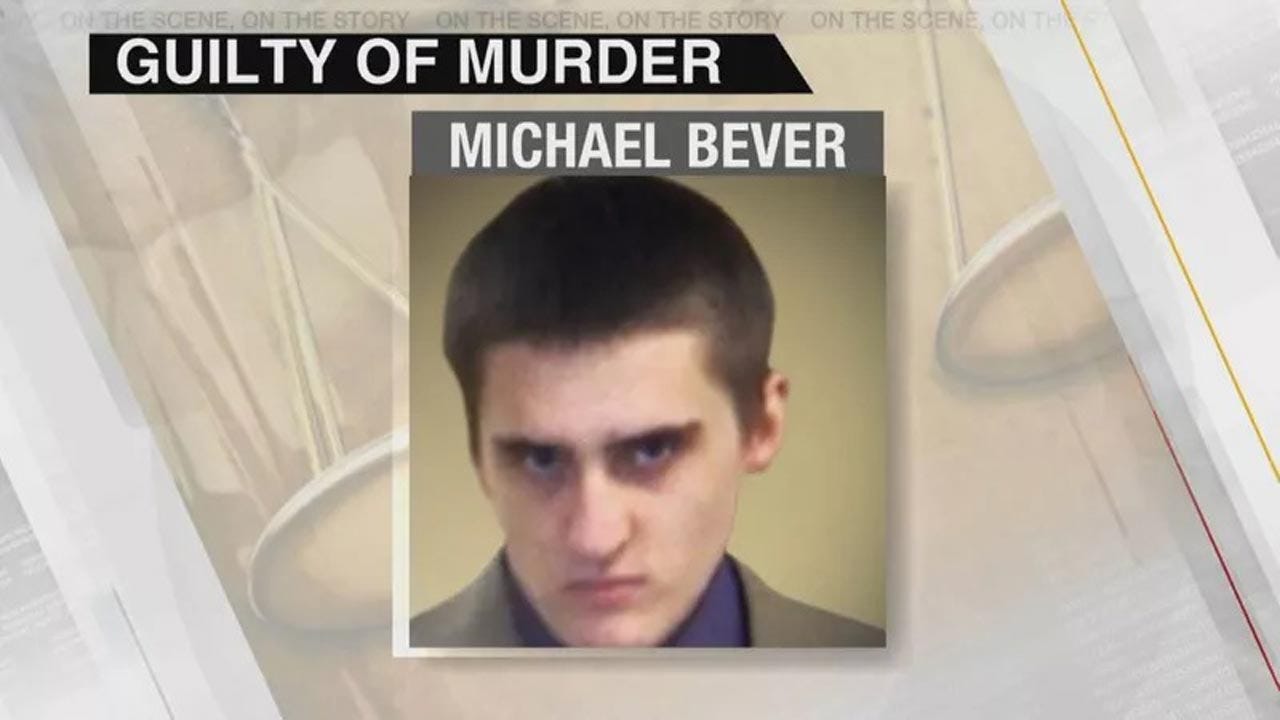 The jury recommended a punishment of life with the possibility of parole for the five first-degree murder charges of which Michael Bever was convicted. They had to find that he was "irrevocably corrupt" and "without the possibility of rehabilitation" to sentence him to life without parole because he was 16 when the crimes were committed.

We don't yet know if the five life sentences will run concurrently or consecutively. That will be up to the judge.

A life sentence in Oklahoma is 45 years, and it's an 85 percent crime so Bever would have to at least serve 38 years.

He has served three years to this point and could be eligible for parole at age 54 should the judge decide the sentences should be served concurrently, according to District Attorney Steve Kunzweiler.

"He would be eligible for parole after about 38 years. He’s 19 right now, calculate that out that’s 57 years. He’s been in jail for about three years, if he gets credit for that he’ll be out at the age of 54, and his sister, the person that her participated in stabbing her in the neck, is gonna be 52. And his younger baby sister is gonna be in her early 40s. I wonder what citizen in the community is gonna feel comfortable with that guy living next door to them," Kunzweiler said.

Bever's attorney, Corbin Brewster, said, "That's true, that’s a sad truth. And, that is a truth that Michael lives with every day. And that is a weight on his shoulders that he’s gonna have to live with every day of his life."

The judge will also decide if the 28 years for the assault of his surviving sister will be added to the total punishment or served at the same time.

It was a very emotional scene in the courtroom with jurors, Michael Bever and Brewster in tears as the jury said they believed Michael Bever could possibly be rehabilitated.

Wednesday, the jury convicted Bever of five counts of first-degree murder in the deaths of his parents and three siblings. He was also found guilty of assault and battery with intent to kill another sibling that survived.

Thursday a jury recommended a sentence of 28 years for the assault and battery with intent to kill charge. The range of punishment for that was between zero years and life.

During the court process Friday morning, Michael Bever’s attorneys called a forensic psychologist to the stand to talk about IQ testing she did with Bever.

She said overall his IQ is 83 and that normal IQ range is 85-115. She said anything below 70 is considered mental retardation.

The psychologist said Bever had strong IQ in the verbal aspect of the test but said his reasoning and how fast he thinks were weaker.

She said a deficiency like that could come from trauma he received as a child, something he may have been born with, or possibly an undiagnosed brain infection as a child.

The psychologist said she can’t determine if someone can be rehabilitated but can only comment on the deficiency. She said someone with that deficiency could freeze up in high-stress situations.

The prosecution, however, said in this particular high-stress situation, Bever didn’t freeze up. Instead, they said he was the one that lured his sister into their bedroom so his brother, Robert, could slit her throat.

They said he also was the one that turned off the family alarm system, came up with a new escape plan on the spot and tricked his younger brothers and sister into opening the doors.

The defense called two other witnesses – a public defender and a teacher who teaches at the jail – that talked about Bever’s love of reading.

The case was then given back to the jury, which is now deliberating on sentencing.

The four-week process has been tough on many people, especially the jurors, so the judge contacted a grief counseling agency to offer help.

Jurors have had to listen to the evidence and see photos of the violent crime scene.

Grief counselor Lauri Lenora was asked to offer her services to the jury. She said secondhand trauma is a real thing and she is urging the jurors to take the court up on the offer.

"Especially after a trial like this where it involves any type of child abuse, homicide, that type of thing. But the things the jurors go through and the trauma they experience secondhand," she said.

Lenora said they'll offer the jurors a few free sessions. She said they have counselors specifically trained to help with the trauma they could be facing.