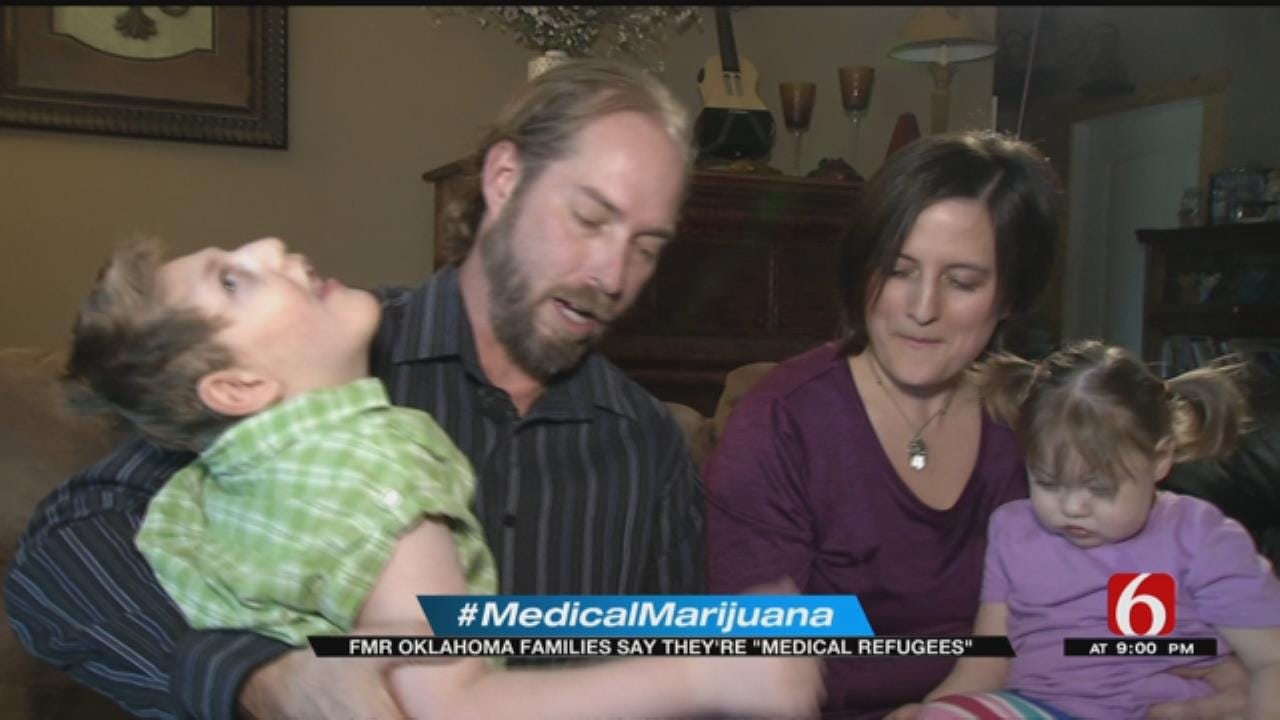 In June, Oklahoma voters go to the polls to decide the fate of an initiative that would legalize medical marijuana.

In the process, they'll also decide the fate of some Oklahoma families who say without it, they may have to leave their homes, and their loved ones behind.

Shawn and Lauren Jenkins know the pain of seeing their child suffer.

Carver was diagnosed with intractable epilepsy at six months old and has been on a steady diet of pharmaceuticals ever since.

“They're narcotics prescribed by his neurologist.  They don't really control his seizures,” Shawn said.

The help they have provided has come at a terrible cost.

“It’s harming his liver and that's something that cannabis won't do," said Lauren.

The Jenkins’ know the success stories of children with seizure disorders being treated with medical marijuana.

But under current Oklahoma law, children can only be treated with cannabis if they suffer at least 50 seizures a day, leaving the Jenkins in the ultimate catch 22.

“We need to take care of Carver and yet we can't violate law and jeopardize our parental rights with Carver either. So, we were left with the option well, we've got to fight," Shawn said.

For Shawn and Lauren, that means advocating for Proposition 788.

For other Oklahomans, the Jenkins' fight is familiar and painful.

Amy Hilterbran's son Austin was diagnosed with catastrophic epilepsy when he was two years old and, like Carver began a heavy regiment of pharmaceuticals.

“Four years ago, the doctors told us the pharmaceuticals were shutting down his organs.  They told us there was nothing more that could be done,” said Hilterbran.

Born and bred in Oklahoma, the Hilterbrans fought to get the issue of medical marijuana on the ballot in 2014 and came up short.

“That's when I told my husband ‘I'm taking Austin to Colorado.’ I had to move, our son is dying," said Hilterbran.

Skeptical of success, Jason stayed behind with the couple's two younger sons.

But Austin showed improvement after his very first dose of cannabis.

“If I hadn't seen it, I would never have believed it,” Hilterbran said.

Six months later, the family had relocated to Florence, Colorado.

There’s an old church where they set about creating a sanctuary for their family and others like them.

The Richardsons from Wisconsin, the Marlings from Kansas, and Juliet Dombrowski of Texas, whose daughter Layla's rare skin condition has filled her young life with unbearable pain.

“She was on enough oxycontin and pain medication to take out three grown men and she was still suffering,” said Dombrowski.

They call themselves American medical refugees and in Colorado, there are hundreds more like them, driven from home by sheer desperation.

“You shouldn't have to leave the people who have supported you for years in order for you to support your child and make sure they can live,” said mother Heather Cameron.

For now, Shawn and Lauren Jenkins wait and pray they won't be forced to join their ranks.

“We love Oklahoma.  We love it here.  We're not planning on leaving,” said Lauren.

These stories are undoubtedly heartbreaking, but News On 6 also talked with a marijuana opponent in Colorado who said there is more to consider when it comes time to vote.

Rachel O'Brien is with the group "Smart Colorado" which tries to keep marijuana out of the hands of minors.

"I don't begrudge a family who is at the end of their rope, who loves their child and wants to do everything, but ... we have abuse in our system.  We have 18-year-olds who, through medical privacy laws, can meet with a doctor and get a medical card ... and they're in school and they share it with their friends ... and we have thousands of those," said O’Brien.