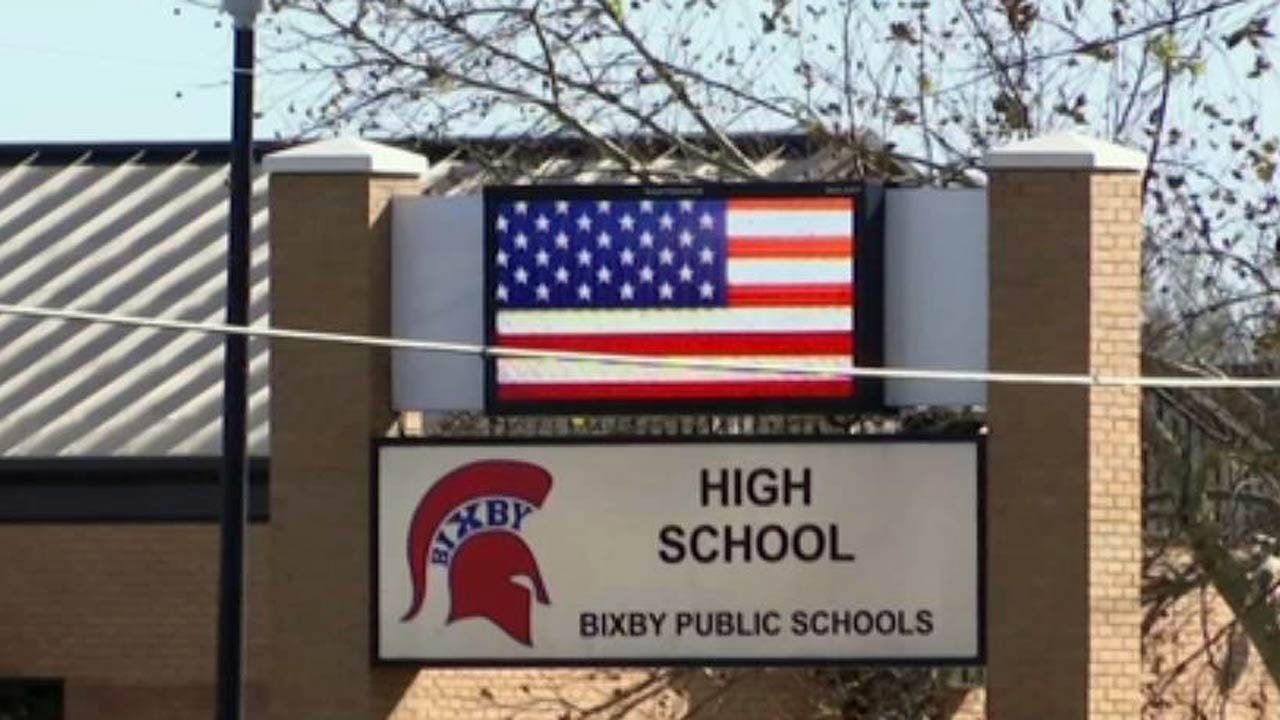 A number of Green Country schools are responding to threats and rumors of threats following the Florida school mass shooting. Coweta Police arrested two juveniles who they say admitted to making threats. Bixby and other schools went on full or modified lockdowns Friday after threats on social media platforms.

Because of all the threats, the Tulsa Police Department posted a PSA regarding the seriousness of social media threats and the consequences.

Interim Bixby Superintendent Lydia Wilson said in an email to parents that they worked with law enforcement and went on general security lockdown guidelines Friday.

The school lifted the general security lockdown around 11:15 a.m., saying law enforcement determined there were no credible threats to any students or schools.

"Bixby Public Schools has been working in conjunction with Bixby Police Department on a possible threat made on social media. As a precautionary measure we went to general security lockdown, but at this time law enforcement has determined that there is no credible threat to any of our students or schools.

The Bixby Police Department has shared the following information: “Just after midnight last night, a Bixby Police Department officer received a tip consisting of an image from an Instagram account threatening “Union, then on to Bixby.”  While police do not believe this is a credible threat at this time, BPD is working with Instagram to identify the poster and has an increased presence at Bixby Public School buildings. Out of an abundance of caution, BPS had placed all buildings on modified lockdown while officers work to identify and assess any threat.”

We are now able to move from general security lockdown to our normal school operations, with a heightened alert. We will be extremely cautious, provide supervision, and  remain vigilant about all that we see or hear for anything that could represent any kind of threat or arouse any suspicion regarding safety.

Currently schools are facing issues with people on social media who are making light of school violence, or in some instances have posted threats to themselves or others, sometimes as a “joke.” All reports will be investigated, and false reports intended to cause disruption or fear will result in consequences, including long term suspension for students and charges being filed with the authorities when applicable.

The initial statement sent out read:

"This is Lydia Wilson, your interim superintendent, letting you know that we have received a social media post that indicates a possible threat. It has not been confirmed to be a viable threat, and we are working with law enforcement on it, as we take ALL threats or even potential threats seriously.  We have taken some precautionary measures to keep our students safe: we have Bixby Police Department officers at every campus and we will operate on general security lock down guidelines.  School is in session, and we are enacting our plans to keep students safe during this precautionary stage.

As always, we would expect anyone who does have any information about any threat to share it with BPS or BPD at 918-366-8294.

I am sure you have multiple questions, and when we know more, I will be in touch again. As I indicated already, at this time, we do not have any verification of a real threat or any specific danger to our schools. We do believe in being proactive - especially with safety.

Union Public Schools also responded to concerns about a threat to their 9th Grade Center. Despite their reassurance, 700 students are out sick Friday. That's more than half the student population at the 9th Grade Center.

In a post on Facebook, the district said, "The Tulsa Police Department is currently investigating threats made on social media directed at Union Public Schools and other neighboring school districts. During TPD's investigations, they have determined that none of the threats made toward Union have been found to be credible. We will continue to be vigilant in order to provide a safe school environment."

Union's superintendent asked parents to stop sharing rumors online and to talk with kids about the consequences of making threats.

It's believed a threat posted on Instagram prompted the lock downs at both Union and Bixby.

Police made an arrest in a threat against Dove Science Academy in Tulsa. Tulsa Police said the suspect was a 15-year-old booked for threatening a violent act. They said the teen admitted to doing it as a joke.

"In light of last week’s school shooting in Florida, copycat threats are not uncommon. However, we must treat each threat with vigilance. We feel confident in our security system and the steps we have taken. School personnel, along with law enforcement officers, are on high alert, and are committed to keeping our children safe."

Tulsa Public Schools investigated a threat made Thursday night against the Central High basketball team, and, as a precaution, had a security guard traveling with the team to an out of town game.

Central Coach Head Coach Eli Brown said, "We do take this threat seriously and are handling it in a serious manner."

The City of Coweta published on their Facebook page around 10:00 a.m. that there were no credible threats and that schools were not on lockdown.

About 20 minutes later, the City posted that Coweta Police had arrested two students at Donald P. Sloat Junior High who admitted to making threats against the school. The post says they students did not have weapons, but because they did admit to making threats they were arrested.

Muskogee's Alice Robertson Junior High was also placed on lockdown Friday due to social media threats. A post on the Muskogee Public Schools Facebook page says they went on lockdown to "increase peace of mind for our students, staff and parents."

Alice Robertson Junior High is also where two students were arrested earlier this week for bringing a handgun on campus.

According to the Berryhill Public Schools district, the Tulsa County Sheriff's Office investigated a threat against the district.

The district went on lockdown for a period of time Friday afternoon and said all students are safe and accounted for. The lockdown was eventually lifted.

The Tulsa County Sheriff's Office said the threat is based off a Snapchat video that said someone was going to shoot up the high school.

In Nowata, there was no individual threat, but a student made an inappropriate comment regarding a weapon on campus, according to a post on the district's Facebook page.

The post says the Nowata Police Department was notified and conducted a search and no weapons were found.

According to the Owasso Police Department, several threats were alleged against multiple schools. The police said no imminent threat was sustained, but each was thoroughly investigated.