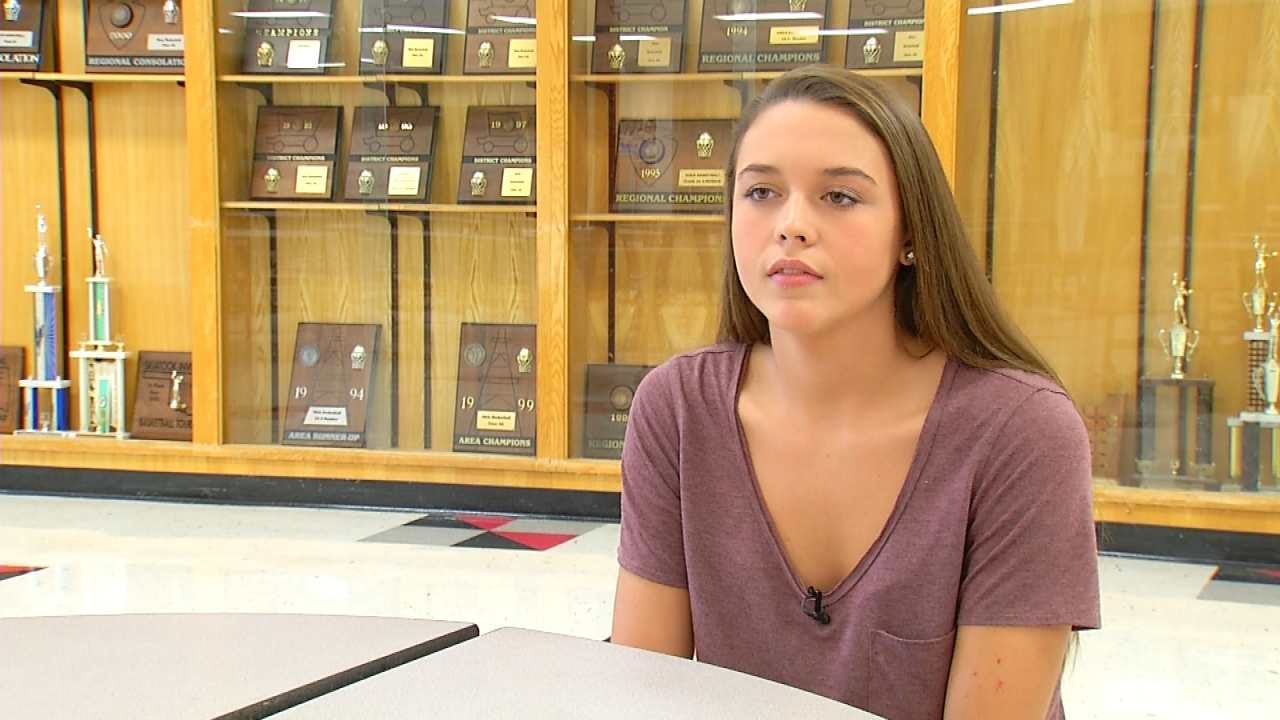 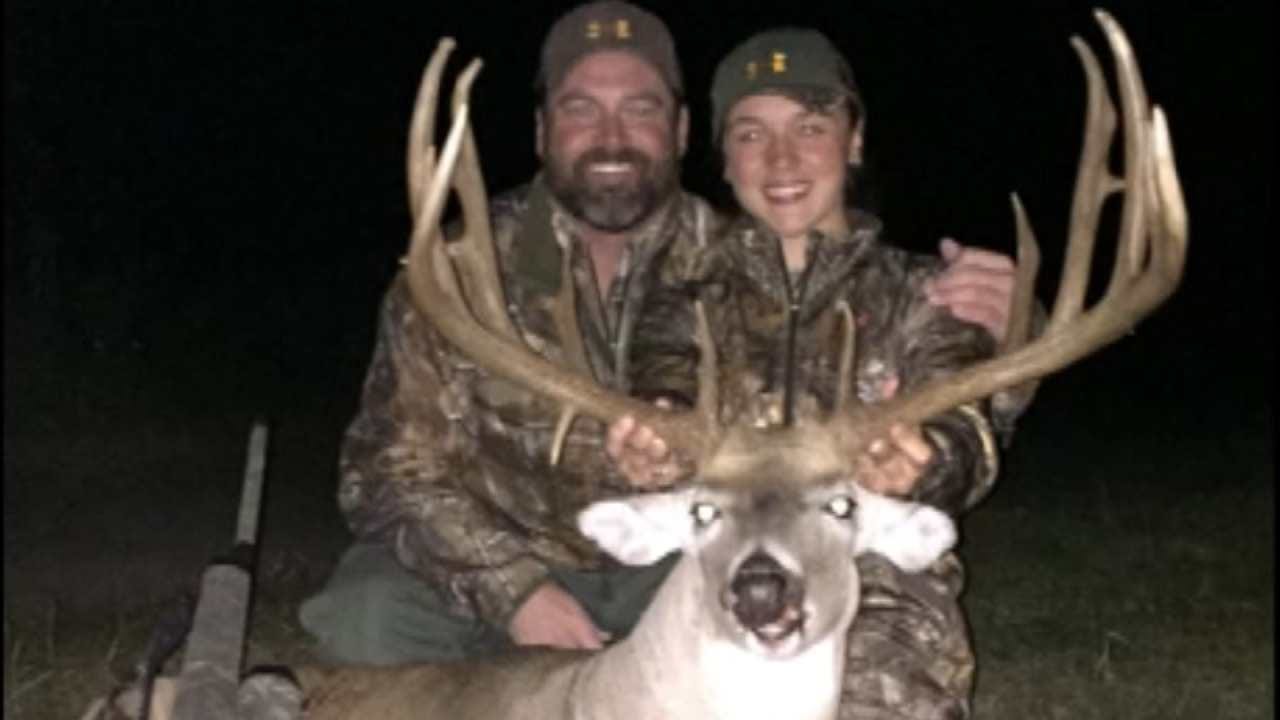 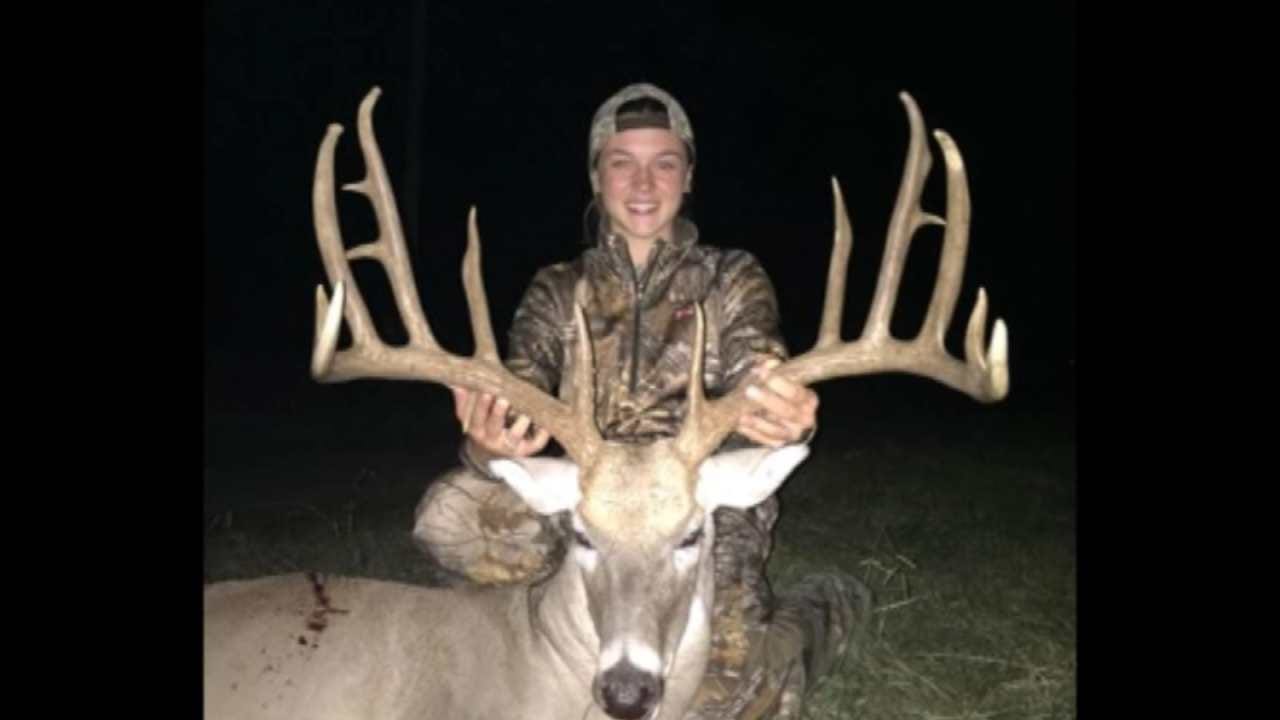 A Skiatook teenager is going down in the Oklahoma record books after harvesting the largest whitetail deer ever taken by a female in the state.

Not only that, but it will almost certainly rank among the top five biggest typical whitetail bucks in Oklahoma. But, 14-year-old Micalah Millard said she was never out for a trophy.

“We hadn't seen him, ever, before that day,” Micalah said. “Just went out and got lucky.”

Monday through Friday, you'll find the freshman at Skiatook High School. But this week, school hasn't exactly been on her mind; instead, she's coming down from what many hunters know as “buck fever.”

“He had nine points on the right side and seven on the left,” she said about her 16-point buck.

She was wearing diamond earrings the day of the hunt, but don’t let that fool you, Micalah says she’s a little bit of a tomboy. She throws for the track team, wake boards and is one of the only girls to play in a men's lacrosse league.

And, of course, she hunts. She started when she was just 6 years old and took her first deer at 8.

“I just really like spending time with my dad, and just being out in the woods,” she said. “It's kind of, just a time where I can, just, really not have to worry about anything else. And there's no cell service, nothing...just kind of get to relax and just be in the outdoors.”

That's where Micalah and her dad, Malachi, were Saturday - hunting on private land in McIntosh County for youth-gun weekend, and it was a slow start.

“We didn't see anything at all that morning,” Micalah said.

When they finished their morning hunt, she and her dad pulled cards from their trail cameras to see if there might be a better place to sit…turns out there was. A buck they’d never seen on the land before showed up in pictures around 5:00 that morning.

“I've hunted for years and years and never seen anything like that,” Malachi said.

It wasn’t a tough decision. That same afternoon they hung a side-by-side tree stand in the area where the picture was taken. There was no feeder and no bait, just the stand and the father-daughter duo, who were posted up by 4 p.m.

“I was just planning to go out and shoot a doe. I wasn't really aiming for him. I didn't think I was gonna see him,” Micalah said.

But, two and a half hours into their hunt, the once-in-a-lifetime buck appeared.

“We initially heard him in the woods along the tree line, kind of pacing back and forth, and we actually thought it was a different deer,” Micalah said.

The buck was following a group of does, and it wasn’t long before Micalah’s dad realized which deer it was. Micalah was calm, but her dad could hardly contain himself.

“He was as close to yelling as you can get in a whisper. He was that excited,” she said. “I guess I didn't really get that excited because I thought I was gonna miss, maybe?”

“To see something that close and with that opportunity, it rattled me to say the least,” her dad said.

As the deer walked across the field, Micalah continued to keep her cool. And when the perfect moment came, she fired her rifle.

“It was impressive. She was calm and didn't get rattled, kept steady and made a perfect shot,” Malachi said. “Probably did better than most adult men would have done.”

“My dad's expression, whenever we saw it drop, he looked at me and goes, 'Oh my gosh, look at me. I'm shaking.' He goes, 'No, really, look. I'm shaking.' He was really excited,” Micalah said. “I was more surprised that I hit the deer versus the deer I hit.”

She said the buck's gross score was around 194 inches, but, after a few deductions, the green score came out to be 187 5/8 inches - the fourth largest typical whitetail ever taken in Oklahoma.

But, for Micalah and her dad, it's about making memories, not making history.

“To be able to sit there with her and watch the whole thing and talk her through it, that was the best part about the whole deal. Doesn't get any better than that,” Malachi said.

Micalah’s picture has been shared thousands of times on social media. She's already been invited to appear at several national hunting events, including the Boone and Crockett Club’s Annual Banquet.

She never dreamed the monster buck would bring so much attention, but said she’s proud to represent female hunters.

“Yeah, yeah...I didn't really think about it like that, yeah,” she said smiling.

The family is having the buck mounted, but they’ve got the antlers under lock and key until the taxidermist is ready for them.

They said they donated all the meat to low-income families in McIntosh County.