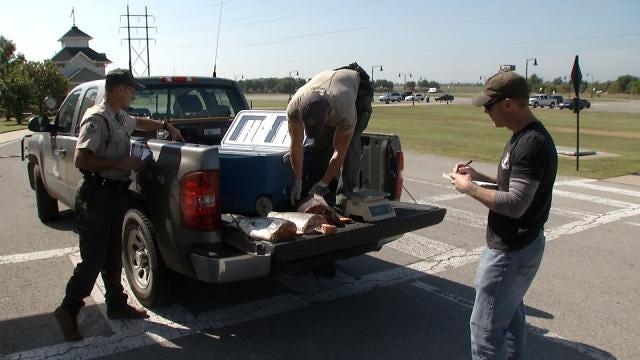 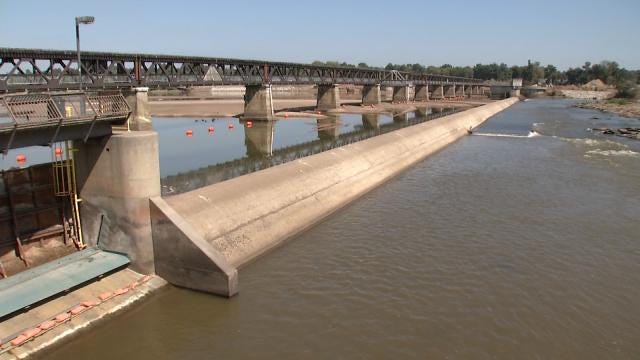 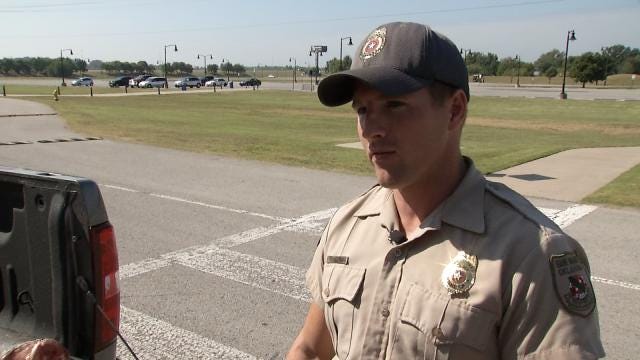 That’s essentially six years’ worth of fish, because there are strict regulations on fishing paddlefish; anglers are only allowed to keep one per day and two per year.

All it took was two ice chests to store the 12 paddlefish that games wardens said were poached early Tuesday morning.

“They were very organized, it was planned out,” game warden Brandon Fulton said.

From the Pedestrian Bridge, Fulton said he and another warden watched one man snag the spoonbill while two other men formed an assembly line to process the fish quickly.

“They had to have done it before,” Fulton said. “Took about a minute to minute and a half from when they snagged it for the two guys to haul it up, cut the tails off, cut the head off, get rid of the guts, get it in the bag and hide it in the grass.”

Even though the fish were cut up, biologists weighed each one, because paddlefish poachers have to pay restitution at $20 per pound.

The meat and flesh of the 12 spoonbills weighed 177.6 pounds, which comes out to more than $3,540 in restitution. Though, it will be considerably more because biologists will calculate what the fish would have weighed before being processed.

Wardens said the men will also be fined for a number of other violations, including snagging in a prohibited area. It’s against the law to snag fish between Keystone Dam and the I-44 bridge.

Fulton said the men told wardens they were going to eat some of the fish and give the rest away.

“There's a lot of fish here and it was very organized for me to think they were gonna give them away,” the warden said.

Fulton said he's gotten reports of people selling paddlefish meat for $10 per pound, which is illegal, and believes that's why the men were poaching.

Some poachers will try to harvest paddlefish for their roe, which sell for thousands of dollars on the black market. But that wouldn’t be a reason for poaching in the fall because the eggs aren’t fully developed until the spring.

He said, over the past month or so, wardens have caught at least one paddlefish poacher every day. On Friday, he said he caught three different men who had illegally netted 14 paddlefish.

“We've been having lots of calls and lots of problems with people taking paddlefish illegally,” Fulton said. “It's been real busy lately. We've been catching lots of them.”

Poaching is on the rise because there’s an unusual amount paddlefish in Tulsa’s stretch of the Arkansas River right now.

Paddlefish biologist Jason Schooley said there are hundreds of the fish stacked up below Zink Dam. Schooley said the fish were able to swim further upstream this summer during the flood, but when the water dropped, the large fish couldn’t make back down river, and they’ve been in Tulsa ever since.

“It's a unique opportunity for us to look at the fish there, but it's also an opportunity to exploit that,” Schooley said.

On days when Keystone Dam is not releasing water for hydropower electricity, the fish are essentially stuck in one spot. Schooley said at least six fish died in shallow water over the weekend.

But, when the water is moving, Schooley said the fish could leave; but, for whatever reason, they choose to stay. And because of that, Schooley said relocating them down river would be a lost cause.

Schooley: “All we could really do is move them down stream, and then they have the opportunity to swim right back up stream.”

Tess: “Which is probably what they would do?”

Schooley: “Most likely. If they wanted to be somewhere else, they would be there. There are opportunities on a weekly basis where they could leave.”

Schooley said paddlefish are sensitive to overfishing, which is why the state has such strict laws in place.

“Once paddlefish are over-exploited, it's hard to get them back. So, we try to stay ahead of that game and make sure we're fishing them responsibly,” he said.

The Wildlife Department has a list of all its regulations online.

Wardens said they will continue to keep a close eye on the area around Zink Dam.