Tulsa Walmart To Reopen After Closing For Plumbing Issues, Renovations 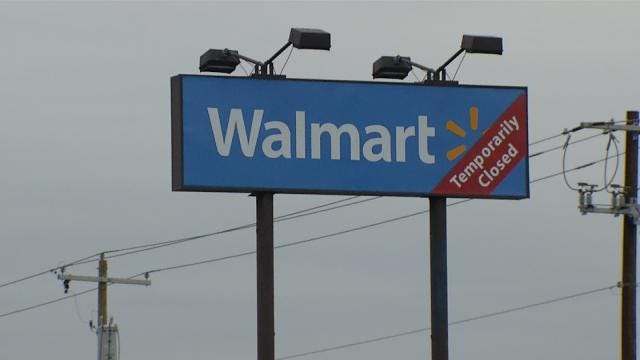 Walmart will be reopening its store near Interstate 244 in Tulsa after reported plumbing issues caused it to close in April, the retail giant says.

Contractors have been seen at the Admiral and Memorial location throughout the summer. The original projected re-opening date was in October, and it appears Walmart is sticking to that timeline.

"While the process to conduct plumbing repairs and store upgrades is still ongoing, our goal is to begin serving customers by late October or early November," a spokesperson said.

That location will now begin a hiring process.

"This includes communicating with associates that have transferred to surrounding area stores and encouraging all others interested in exploring employment opportunities with Walmart to also apply," a news release says. "We thank the community for their patience as we work through these issues and are excited to give our customers a store that better reflects the shopping experience we are providing today in other markets across the country.”

Other Walmarts across the United States experienced similar renovation problems, the company announced earlier this year. In Texas, Midland and Livingston stores were closed for six months, and stores in California and Florida also were closed, citing the same issues. All those stores also are said to be undergoing a facelift inside also.

The temporary closures caused interesting conspiracy theories to circulate around the United States. Some people told News On 6 they believed the store in Tulsa was not emptied of people because of needed renovations, but it was being used instead as a secret indoor military camp to train the U.S. Army to carry out martial law.

Others said they believed Walmart closed the doors because it was trying to punish local workers for wanting to join a union.

Tulsa Walmart To Reopen After Closing For Plumbing Issues, Renovations