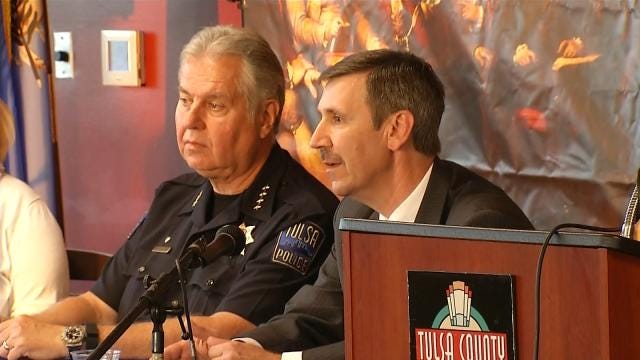 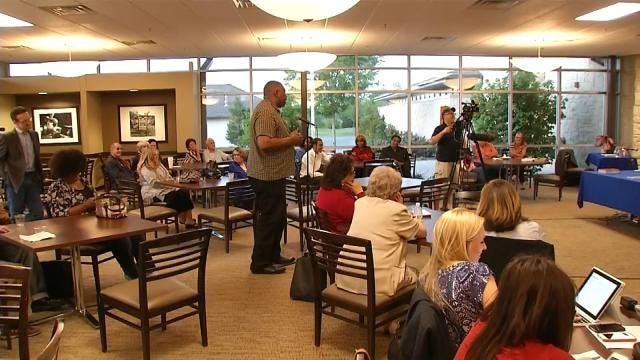 Tulsa's district attorney and police chief talked public safety Tuesday night; everything from budget shortfalls, to diversity in their departments to use of force.

The two said they care about the community's concerns, and both agreed that if they don't participate in these discussions and hear from the community, it's all for not.

Tulsa Police Chief Chuck Jordan and Tulsa County District Attorney Steve Kunzweiler opened up for questions, which quickly turned to the topic of use of force.

Marq Lewis, the leader of many protests in Tulsa, read a TPD document revealing each time an officer used force in 2013.

Jordan said it seems like a lot because he asks officers to write use of force reports even when they escort someone.

"I don't agree with Marq Lewis on a lot of things, a lot of facts, but you know what? He's bringing things to our attention," Jordan said.

He said his officers are trained to recognize when an officer is losing control in a high-stress situation, and pull that officer aside.

He's sending his lawyers into the community to connect.

"See what their issues are. I've seen some really positive suggestions that are coming out," Kunzweiler said.

Others asked about diversity in the police department.

Jordan said his department is 14 percent African-American while the community is 18 percent.

The biggest concern was budget shortcomings.

Kunzweiler said he needs $15 million just to keep the Oklahoma district attorney doors open and Jordan said he has 749 officers, but would like more.

"I've said that my optimum number, at this time, would be 921. It's all laid out of where they would go. We'd bring street crime units back," he said.

The conversation lasted more than an hour and a half, all in the name of keeping the community safe.