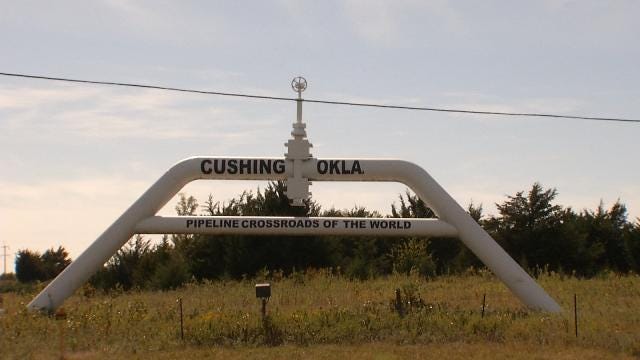 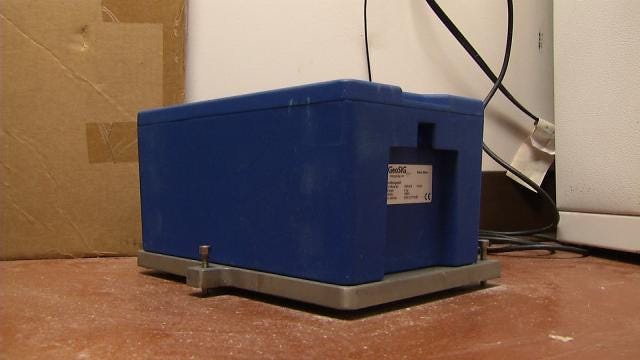 It's not the place you'd expect to find a piece of high-tech earthquake monitoring equipment, in the storage room of the Cushing Municipal Airport, but it's exactly where the U.S. Geological Survey put one of its NetQuake Seismographs.

Cushing is the 'Pipeline Crossroads of the World.'

“It's kind of the Grand Central station of the big oil,” petroleum geologist Bob Jackman said.

But more recently, Cushing has been making headlines for its earthquakes.

“This is a potential catastrophe,” he said.

Jackman says the small town can store up to 46 million barrels of crude oil.

There were ten earthquakes in Cushing last week, the two largest at 4.0 and 4.3 magnitude.

And the U.S. Geological Survey says the 4.3 was centered directly under a Cushing tank farm and across the street from the Cushing Municipal Airport.

“It was pretty intense and I sought cover because I wasn't sure exactly what was happening,” airport manager Jim Clements said.

Clements said the quake knocked down ceiling tiles and cracked the walls, but it mostly rattled his nerves.

“I have some concern,” he said. “I guess, mostly for me, is I don't know when the next one's coming.”

That's what the USGS wants to find out, which is why there are four seismographs on the ground now in Cushing. They're being used to narrow down and refine the location of earthquakes and they pick up even the slightest movement.

“When the refrigerator comes on and goes off, they can actually see that - that's how sensitive it is,” Clements said.

The monitors have already picked up movement, but nothing like the 5.6 quake that hit just south of Cushing in Prague three years ago.

Jackman said if an earthquake of that magnitude hit Cushing, it could cause considerable damage to the oil storage tanks and facilities. Anything larger than a 5.6 would likely be a disaster, he said.

“If we got a very high-magnitude earthquake in the Cushing area, it could be a catastrophe,” Jackman said.

And even if the epicenter was in Cushing, it could have a ripple effect across the state.

“This is what drives the Oklahoma economy, if it wasn't for the oil... this is what makes the world go 'round for Oklahoma,” Clements said.

The seismic monitors are expected to be in Cushing for about a month.