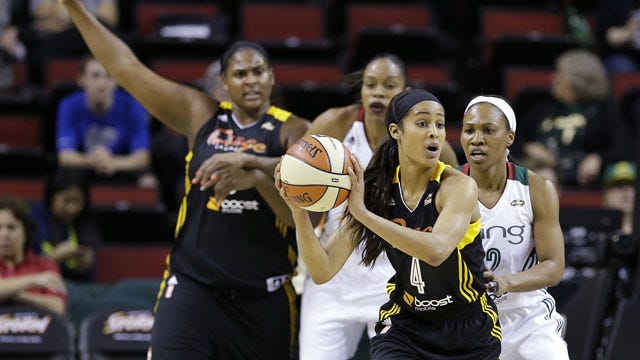 The Shock won their second consecutive game by crushing the New York Liberty 72-57 on Tuesday. Skylar Diggins led the team with 21 points and seven assists.

Diggins has scored more than 20 points in five of seven games this season.

"We want to make sure we protect home court, and that's what we did tonight," the second-year guard said. "We want to just keep building this fan base in Tulsa, and coming out here and executing is what we want to do."

Courtney Paris earned her fourth double-double of the season, putting up 12 points and a career high 16 rebounds.

"That's one of my biggest jobs here and I knew that coming in," Paris said. "One of coach's things for me is to rebound, so I always try to focus on that."

Nine shots were missed to begin the game by the Shock and Liberty; the first bucket was a three pointer by Tulsa's Roneeka Hodges with 7:10 left in the first quarter.

Tina Charles put up a double-double for the Liberty, leading the team with a season-high 25 points and 10 rebounds. It was Charles' fourth double double of the season.

Tulsa takes the floor again on Friday against Los Angeles at 7 p.m.