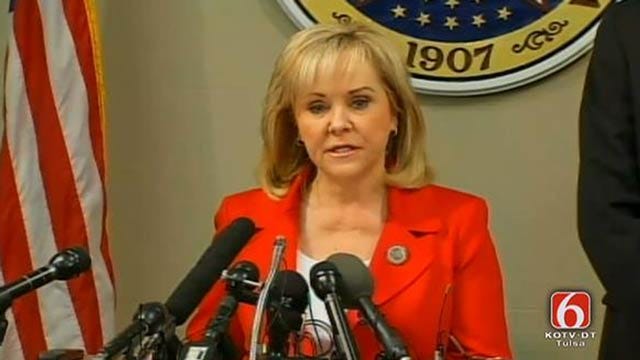 Governor Mary Fallin called for an independent review of Oklahoma's execution protocols after an inmate had an apparent heart attack 43 minutes after his execution began Tuesday evening.

Oklahoma was using a brand-new protocol in Clayton Lockett's execution.

The execution was halted after more than 20 minutes, after Lockett began writhing on the gurney. He died a short time later.

Oklahoma's execution of Lockett, who writhed, clenched his teeth and appeared to struggle before prison officials halted the procedure failed to meet the humane standards required when the death penalty is carried out, the White House said Wednesday.

But Carney says the U.S. has a fundamental standard that the death penalty must be carried out humanely, citing the Eighth Amendment. He said everyone would recognize that this case fell short.

A statement also was released on Wednesday by Marc Hyden, Advocacy Coordinator for Conservatives Concerned About the Death Penalty:

"Yesterday's execution in Oklahoma is just the most recent example of what happens when unchecked government power is shrouded in secrecy. The debacle in Oklahoma began well before the actual execution, including secretly obtained drugs and untested, experimental protocols. Conservatives fear that a government acting in secrecy may well be covering up its own mistakes and abuse. This is not the transparent government we demand."

In Ohio, the January execution of an inmate who made snorting and gasping sounds led to a civil rights lawsuit by his family and calls for a moratorium.

That execution also used the drug midazolam, but in a lower dosage than Oklahoma used and as part of a two-drug combination. The state has stood by the execution but said Monday that it's boosting the dosages of its lethal injection drugs.

The Associated Press and CBS News contributed to this report.