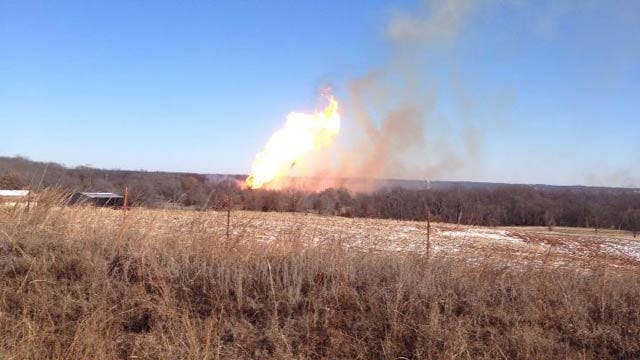 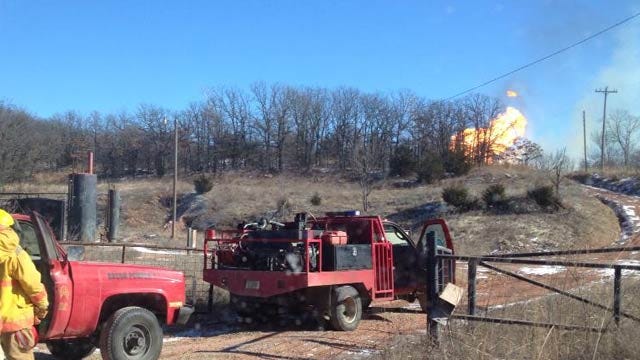 The blast cut off gas to several homes and Monday evening some residents are still without service.

The explosion happened in the small town of Milfay, which is southwest of Depew.

Investigators are still working to figure out what caused the explosion.

It sparked a large fire that made one woman stop to capture the moment on camera.

Theresa McKinzie was tending to her horses near Depew when she saw a massive fireball.

She described it as shooting about 10-15 hundred feet in the air before collapsing.

"Then a few seconds following, there was a very large boom, shook everything, rattled the car everything else," McKinzie said.

McKinzie and her husband immediately called 911 and ran to the area to make sure no one was hurt.

"In this cold weather, you always worry about what people are doing to heat their homes and stuff like that and were just really worried," she said.

A ONEOK spokesperson can't say yet what caused natural gas to leak out of the pipeline and that runs from Depew to Tulsa.

McKinzie says there are gas lines all around the rural area and she was very worried about the safety of others.

Theresa McKinzie, Witness: "We also know people who go out and they tend the gas lines, so you never know who's going to be out there in a situation like this," McKinzie said. "It's a small town. Kids get out and play. Luckily it was cold enough nobody was back there."

After they realized everyone was okay, she took pictures and a cell phone video of the flames.

"We did that as we were getting ready to leave just to kind of capture it because it's not something you see every day certainly," she said.

The pipeline is in the Oklahoma Corporation Commission's jurisdiction.

It says 48 ONG customer meters are out of service because of the line explosion.

All gas to that line has been turned off to prevent any other fires.

The corporation commission expects all gas services to be restored before Tuesday.