Fath' Carter: I Should Have Never Interviewed With Sports Illustrated 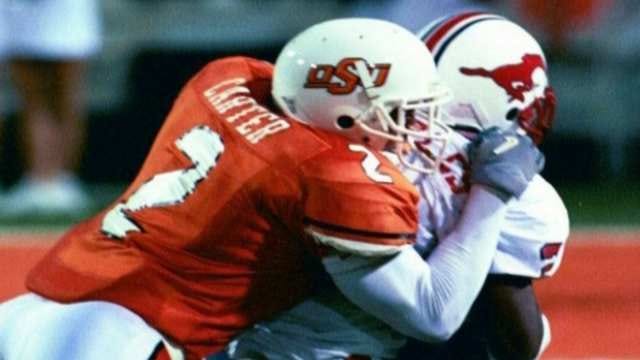 Fath' Carter, the only SI source to openly stand by his story, is speaking out following an ESPN report calling his quotes "inconsistent" with university documents.

"I should have waited to say I stand by my story until I read all five parts of the series," Carter said.

In Tuesday's SI report, it says Carter told writer George Dohrmann he graduated from OSU with a degree in education.

"I only told them I had a background in education," Carter said.

In ESPN's online article, it said Dorhmann told CBS Sports Radio's "The Doug Gottlieb Show," that Carter "has two degrees from Oklahoma State, spoke on the record, recorded. I have no reason to believe he lied. And he's certainly not disgruntled."

Carter said, "I never told them anything about having two degrees."

Reporter Tess Maune: "Do you have any animosity toward OSU?"

Carter: "No, not at all, not at all. I do love Oklahoma State; it's helped me develop the life skills I have now."

In the story, Carter also claimed while attending Oklahoma State, he and running back Tatum Bell had a class together in which they were given As, then took another class with the same professor during the spring 2004 semester and received Fs.

Bell said he and Carter did have classes together every year, but records show Bell withdrew after the Cotton Bowl in January and did not take any classes in 2004.

"For him to say I cheated on a test or a professor was giving me grades, that's false. I always worked hard for my grades," Bell said. "After the Cotton Bowl, my last game, I wasn't enrolled in school, I started getting ready for the draft. He may have still been enrolled in school getting Fs, not me, so that's totally false."

Carter said he did not give the magazine dates and claims and never implicated Tatum Bell.

"I should have never interviewed with Sports Illustrated," Carter said.

Carter released this apology to the OSU community Friday:

"I first want to apologize to the OSU community on my behalf on what the SI article has caused. I was led to believe the article was about something else when I agreed to sit down with SI, when it was indeed a bashing campaign. When I backed what I said I had only read the first section on Tuesday, I had not read or had access to the rest of the articles as they hadn't came out yet. Had no idea it was a five part series trying to take down the program, and it was supposed to be about how OSU turned the program around, and later [I]declined the Video interview once I realized, [I] was naive and should of been smarter. I never stated that I had two degrees and didn't give dates on academic misconduct. It is my fault for not waiting until the full article came out before commenting on the situation and I regret it. I love all of my former players and they know me. Any transgressions and misconduct I did where my own. I am not disgruntled in any way. Terry Henley is like a father figure to me!!! I love that man, he helped me make the transition into a man and counseled me throughout my years at OSU both on and off the field, I told SI that. The things he instilled in me I use now. I cannot say enough about him and his staff. He truly invested in me even though I was young and dumb at the time. He is very capable, honest, trustworthy and an excellent counselor. Of course that wasn't put in the article."

The blog "Deadspin," which is often critical of media, posted a story Thursday afternoon with quotes from the head of Oklahoma State University's sociology department, who refuted SI's claims that student-athletes were given favorable grades. Dr. Duane Gill also said student-athletes weren't funneled into the program because of its purported ease, and the requirements have tightened since the mid-90s. He also told Deadspin that no one from SI contacted the department for information on Carter's claims, which he is now saying were misquoted.

Fath' Carter: I Should Have Never Interviewed With Sports Illustrated