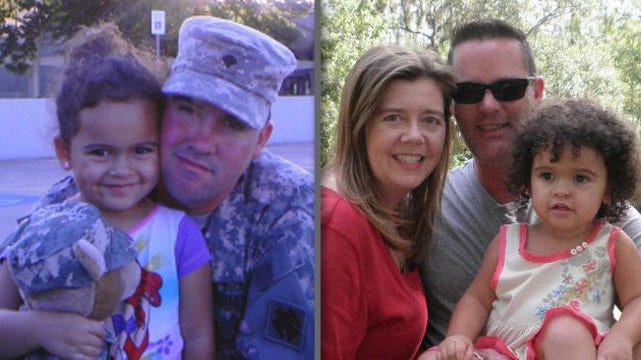 We've been getting a lot of questions about the history of the custody battle over little Veronica, a case that we've been covering for over two years, but that has been going on for nearly four.

Even U.S. Supreme Court Justice Sonya Sotomayor said the facts of the case are "hotly contested." We put together a timeline of events in the case and in the life of little Veronica.

May 2009 - Relationship is strained and Maldonado breaks off engagement

June 2009 - Maldonado and Brown start texting each other about child support and parental rights. Brown says he'll terminate his parental rights via text message. Maldonado then decides to place Veronica up for adoption; has an attorney call the Cherokee Nation to check Brown's tribal membership, but provides incorrect spelling of his name and incorrect birthday; Cherokee Nation says they don't have a record for anyone by that name and birthday

Sept. 15, 2009 - Veronica Rose is born, Matt and Melanie Capobianco take her to their home in South Carolina to begin adoption proceedings

January 2010 - When Veronica is 4 months old, the Capobiancos serve Brown with an adoption notice; Brown signs the adoption papers, claiming he thought he was giving custody of Veronica to Maldonado

January 2010 - The day after signing the papers, Brown calls an attorney and begins trying to reverse what he signed, subsequently requesting a stay of the adoption. Around the same time, the Cherokee Nation identified Brown as a registered member and Veronica as an "Indian child" as defined in the ICWA.

April 2010 - The Cherokee Nation intervenes in the litigation

December 31, 2011 - Veronica goes to live with Dusten in Oklahoma

April 2013 - Baby Veronica's case is argued in front of the U.S. Supreme Court

July 1, 2013 - Brown, his wife Robin and his parents all file adoption papers in Oklahoma

August 2, 2013 - The U.S. Supreme Court issues brief order turning away a final request from Dusten Brown and upholding the adoption and transition plan as final

August 4, 2013 - Brown misses a mandatory custody meeting with the Capobiancos in SC, OK National Guard said it would not make an exception and release Brown from training

August 5, 2013 - SC judge throws out transition plan for reintegrating Veronica with the Capobiancos and orders the girl be brought to SC immediately

August 12, 2013 - Brown turns himself in to Oklahoma authorities

August 13, 2013 - Governor Mary Fallin says she won't sign extradition papers to send him to SC until he his case has been argued in Oklahoma courts

August 14, 2013 - Capobiancos hold a news conference in Tulsa, explaining they've traveled to Oklahoma to get Veronica

That brings us to Monday's protest at the state capitol, where members of several Native American tribes held demonstrations in support of Veronica staying with her biological father.

Veronica turns 4 years old in less than a month, and we'll be watching what happens between now and then.