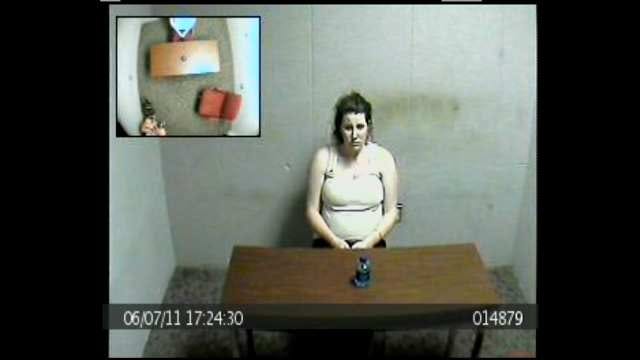 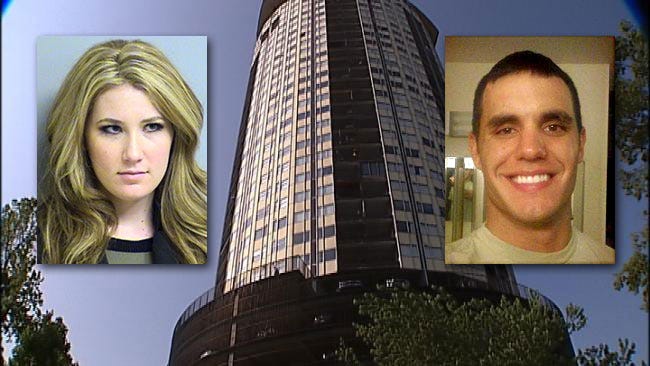 Amber Hilberling was convicted last month of pushing her husband, Josh, out a 25th-story window to his death in June of 2011, and Friday a judge released evidence, including video, that until now was only seen by the attorneys and the jury.

Of all the evidence released, the most interesting is the hour-long videotape taken while Amber Hilberling and her grandmother were in a police interrogation room, waiting to talk to a detective, unaware they were being recorded.

Hilberling sobbed and rambled while talking to her grandmother, Gloria Bowers, who was sitting in the corner. Her grandmother repeatedly warned Hilberling to exercise her right to silence, to not talk to police until her attorney arrived, but her emotions seemed to get the better of her.

Hilberling: "For the rest of my life, everyone's going to think I'm a murderer, my family, the whole family."
Bowers: "Amber, we don't think that baby."

Crime scene pictures show the inside of the apartment, where the couple had been arguing all morning.

Josh Hilberling's bags were packed and, on top of them was the protective order he'd gotten against her, even though it had been dismissed weeks earlier, because he failed to show for court.

You can see the window in the bedroom that had broken earlier that day, and the window that was broken in the living room after she pushed him through it.

Prosecutors pointed out the candlesticks perfectly in place, to cast doubt on Hilberling's story that he grabbed her and they were struggling when she pushed him. After saying repeatedly that she pushed Josh and killed him, Hilberling's grandmother got stern with her.

Bowers: "Did you intentionally push him?"
Hilberling: "No! Of course not."
Bowers: "Okay, that's what they're gonna take it as, baby. That's what I said, everything you say, they're going to take it in a different manner."

On the tape, Amber repeatedly says she can't get the image of Josh falling and his broken body out of her mind and how she wishes she was the one who was dead, even though she was seven months pregnant.

This evidence was released after News On 6 and two other media outlets filed open records requests. We decided to do so, because this case is so unusual and has such high public interest.

The jury recommended Amber Hilberling go to prison for 25 years. Her former sentencing is set for April 23.