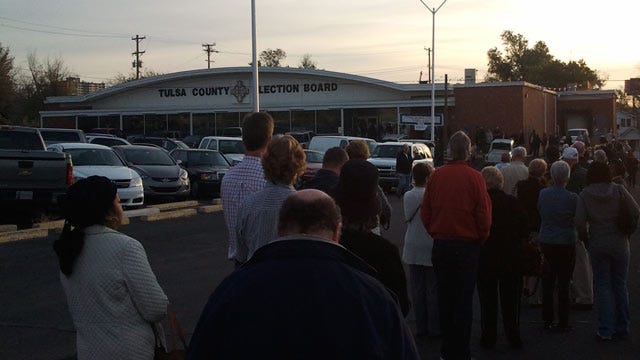 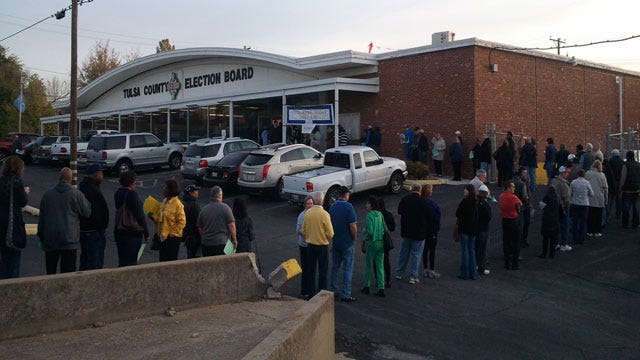 Early voting for the 2012 general election began Friday morning across the state of Oklahoma. Voters are deciding presidential, congressional, state, as well as some county and local races.

The lines at the Tulsa County election board have been backed out to the street since Friday morning.

And if you're one of those wanting to beat the Tuesday rush, there are still a couple things you should know before heading off to cast your ballot.

"I was planning on being first to vote in Tulsa County, so you can see I was a little bit naive about that," said Elizabeth Ham.

Before the doors even opened Friday morning, there was a long line of people waiting to cast their ballots at the Tulsa County Election Board.

"I was surprised it was this long," said Duke Dresser.

"I should have remembered from last time, we had just as many," said Raj Basu.

"I worked at the polls for years, and I'm glad it's not snowing, or freezing or raining," Ham said.

"It's a gorgeous morning to vote, and the line hasn't been too bad," said Diane Stamm.

Diane and her husband, Greg, came prepared with coffee, just in case they had to wait.

There were long lines at all of Oklahoma's 77 precincts, including in Oklahoma City, where folks trying to beat the rush, wrapped around the block.

The wait's about 20 minutes, and election officials say once you get through the line, the voting process takes about ten more.

But they want to remind voters of a few changes this year, before they head off to their precincts.

This is the first Presidential election in Oklahoma, where you'll need to show a state or federally issued ID or your voter registration card.

And some precincts have changed, so where you need to go to cast your ballot may be different than in years past.

If you don't have the proper ID or you go to the wrong precinct, you will have to cast a provisional ballot that won't be counted until November 9.

The election board here in Tulsa said they've average about 360 people an hour, down roughly 100 people from 2008.

For a list of county election board offices across the state, go to the Oklahoma Election Board web site.

On Election Day, Tuesday, November 6, polling locations across Oklahoma will be open 7 a.m. to 7 p.m.

If you're not sure where to vote, you can verify your registration and find your polling place on the Oklahoma Election Board website.