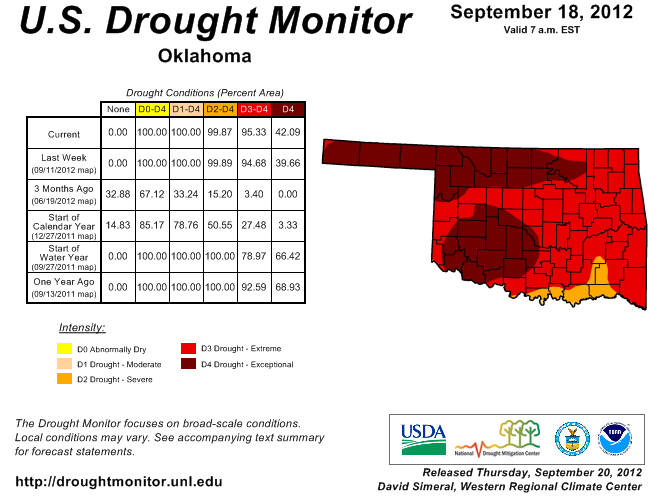 I took a trip last week to the far western extent of the Oklahoma Panhandle for the annual Okie-Tex Star Party. Doing so, I missed seeing most of the rain fall across eastern Oklahoma. On the way out there, it was evident our land desperately needs more rain. Between the barely-there ponds and the brown landscape, it was clear this was a widespread issue. Although the Panhandle generally looks and is dry, it was still showing signs of a long-term drought. On the way back to Tulsa, there were some noticeable changes in the landscape. After a few days of cloudy skies and rain, the landscape had greened and even trees had re-blossomed after nearly going dormant after our harsh summer heat.

While the short-term effects were certainly beneficial, the rainfall did not put too much of a dent in our drought. The latest Drought Monitor above shows that while parts of northeastern Oklahoma fell out of the worst drought category, "Exceptional," pretty much all of Green Country is shaded in red. That means extreme drought still has a grip on the region. With even less rain in their buckets, southwestern Oklahoma actually saw the drought worsen this week with a broad region of exceptional drought showing up there.

In reality, our drought has remained fairly steady-state in eastern Oklahoma since August. Occasional (although far from frequent) rains and cooler temperatures have offset the otherwise drought-inducing weather pattern. Little relief is anticipated in the short-term, however. While cold front after cold front tries to push through Oklahoma, the lack of return-flow moisture from the Gulf and lack of upper-level dynamic support for storms provides little focus for widespread rain.

The large-scale (synoptic) pattern will be changing after this week. Instead of a strong upper-level trough over the Great Lakes spinning system after system away from us, a more zonal flow in the jet stream will allow better mid and upper-level energy to stream our direction. This gives us greater hope of more frequent rains.

On a positive note, our temperatures are about to take another dive. One final (dry) cold front will sweep southward across Oklahoma early on this weekend, bringing in another cool, crisp air mass. Coincidentally, it will arrive just as fall officially begins on our calendar – 9:49 a.m. CDT on Saturday. The weather will be very pleasant, but our drought will quietly persist until our fall rainy season finally kicks in.