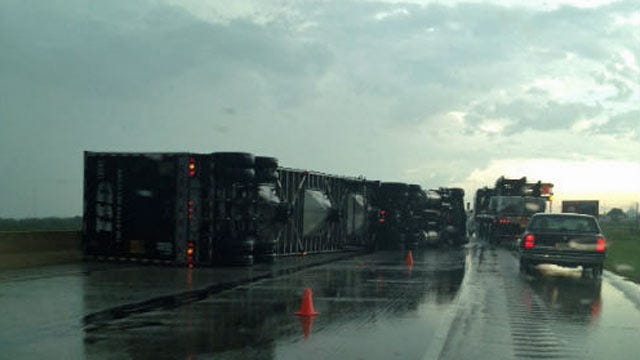 A Missouri semi truck driver was killed Friday afternoon when straight-line winds caught the semi's trailer, causing the truck to flip on its side onto the cement barrier wall.

OHP said the semi was six miles east of Afton in Ottawa County, traveling westbound on the Will Rogers Turnpike, when the accident happened. The cab hit the cement barrier wall and flipped onto the driver's side.

Troopers said King was pinned for nearly three hours before he was freed by the Miami Fire Department, using the Jaws of Life.

King was pronounced dead on the scene from massive injuries.

That wreck caused the highway to be closed for a time on Friday afternoon.

The semi driver's death brought the number of confirmed fatalities from Friday's storm up to four.

An infant girl and her grandparents were also killed in the storm in Nowata County.