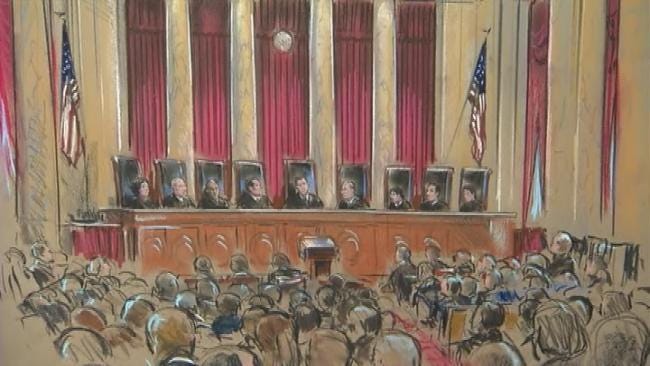 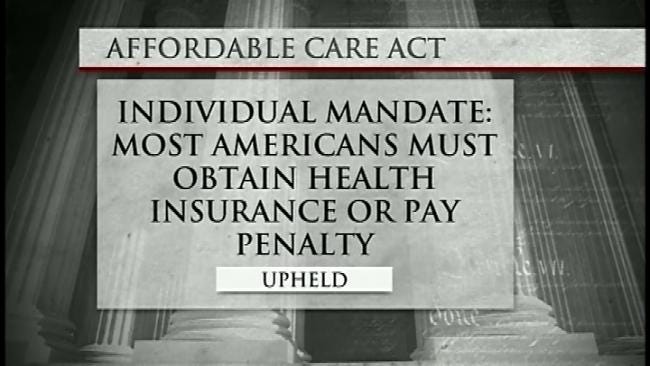 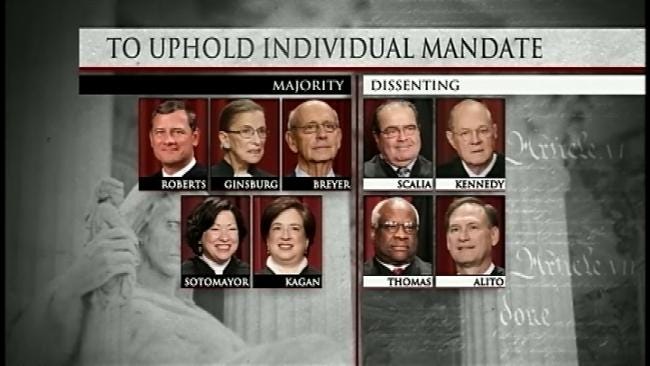 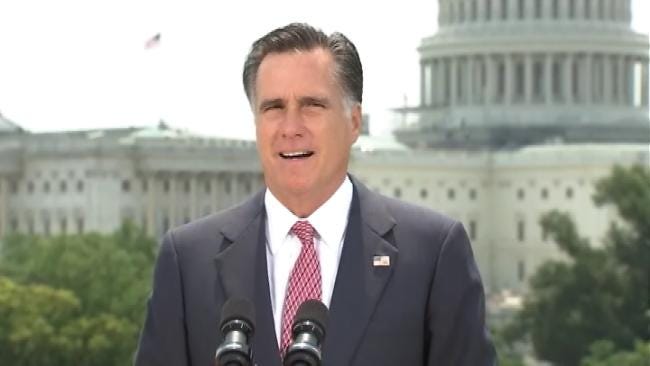 The Supreme Court handed down its decision Thursday morning, upholding a key component of the Obama Administration's healthcare overhaul: The individual mandate which requires nearly all Americans to buy health insurance.

In a 5-4 decision, Chief Justice John Roberts broke ranks with fellow conservative justices saying Congress did have the power to pass the reform because it has the power to tax.

"Finally the court validated a law that was clearly constitutional," supporter Nina McHugh said. "I'm proud to be an American today."

The ruling also allows children to stay on their parents' insurance until age 26. The justices did limit the law's expansion of insurance for the poor, ruling the federal government cannot withhold a state's Medicaid funding if it doesn't participate.

Meanwhile, business owners are trying to navigate through what the new healthcare changes mean for them.

Under the new law, employers with 50 or more employees will now be required to offer employer-sponsored health plans.

Businesses can elect not to participate, but would be fined $2000-$3000 per employee.

Experts worry it could cause a devastating trickle-down effect on the already suffering economy.

"They're gonna have to consider how it effects their ability to run their business efficiently and it's gonna be very unfortunate if we see an environment created where employers now are having to lay off employees." President of Tulsa's Summit Financial Group Todd Rolland said.

As for those with fewer than 50 employees, they're still fearful of what it could mean for their business.

Experts say with conservative momentum in the November election, repealing some of the portions of the healthcare law will be the first area to address.

The Republican-controlled House is already promising a vote to repeal the law.

"We can, and we will repeal Obamacare," U.S. Rep. Michele Bachman, R-Minn. "That is the hope that America needs to hold on to."

"What the court did not do in its last day in session, I will do on my first day, if elected President of the United States, and that is, I will act to repeal Obamacare," Romney said. "Our mission is clear: If we want to get rid of Obamacare, we're going to have to replace President Obama."

By 2014, the law is supposed to bring affordable coverage to 50 million uninsured Americans.

House Republicans are promising a repeal vote when they return from the Fourth of July break.

"Now is the time to keep our focus on the most urgent challenge of our time, putting people back to work, paying down our debt and building an economy where people have confidence if they work hard they can get ahead," Obama said.