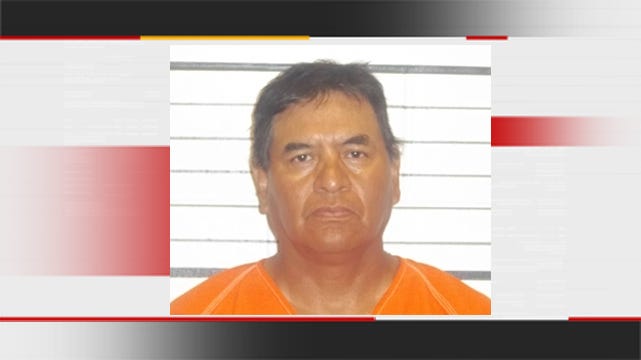 A Sapulpa High School assistant softball coach has been arrested and is facing felony charges after police said he admitted to secretly videotaping girls in the locker room.

A school employee found a camera on Wednesday and took it to police.

Police then went to the facility and saw a hole in a trash can, which contained a second camera concealed inside. Authorities said both cameras showed girls, nude from the waist down, in the bathroom stalls. The cameras even contained shots of Howard Harjo, 54, placing the camera, disguising it and adjusting its angle.

"Harjo was located and during a subsequent interview, admitted he placed the cameras for the purpose of viewing the girls at the facility," Sapulpa Police Capt. Bret Bowling said.

Authorities said Harjo was videotaping young girls in the locker room for quite some time, possibly up to four years.

Sapulpa Public Schools released a statement Thursday saying Harjo, who was not a teacher at SHS, was relieved of his duties immediately.

He had served as an assistant coach since 2008.

School officials said they met Thursday afternoon with softball parents who were anxious to identify the victims. Counselors are also available for softball players, according to SHS.

"What we have also asked them to do to help their student understand to maybe curb the Facebook and Twitter [postings]," Sapulpa Superintendent Mary Webb said. "So much information gets twisted when it gets sent out that way."

She says Harjo had a clean background check and was liked and trusted and no one ever suspected this type of behavior.

In addition, Harjo is the head coach for an area 18-and-under club softball team called the Oklahoma Diamondbacks, which is a competitive team for players who have college potential.