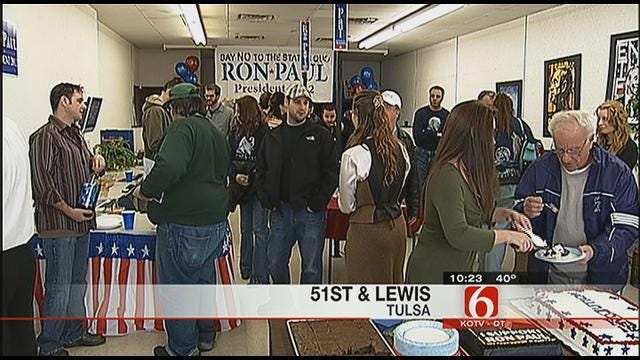 As the Republican field sets its sights on New Hampshire, one of the candidates is looking forward to the Oklahoma primary.

It's not until March 6, 2012, but Ron Paul is already planting roots in Tulsa.

He is the first Republican candidate to open campaign offices in the Sooner State. One is in Norman. The other's here in Tulsa where supporters are hoping to make their candidate stand out in a crowded field.

Inside a mostly-empty strip center at East 51st and South Lewis is a campaign office filled with balloons, bumper stickers and belief.

"We're in the heart of the nation," Ron Paul supporter Wade Williams said. "We're right in the middle of everything. We are the crossroads here in Oklahoma. Whatever affects the rest of the nation usually starts here and ends here."

Paul's supporters are buoyed by the candidate's third-place finish in the Iowa Caucus and hope he can maintain that momentum in Tuesday's New Hampshire Primary.

"New Hampshire is a very liberty-minded state. They have an open-carry there. I think he's going to do extremely well in New Hampshire," said Angela Daniel at the Tulsa Grassroots Ron Paul Headquarters.

Voter education lies at the heart of this grassroots effort to help Ron Paul win the Republican nomination and eventually, the White House.

"You can't make a good decision if you really don't know who you are voting for and what they represent," Daniel said.

Any voter with a television set now has a pretty good idea what the candidates stand for, after 20 primaries since the spring between the Republican candidates.

"I think the more exposure we get, the more the truth will come out. People will see the candidates for what they really are," said Tyler Thulin, a Ron Paul supporter.

While the candidates perform on a national stage, these supporters hope to make a difference locally with lectures on hot-button topics.

And voter registration drives, hoping their volunteer efforts inspire voters of all stripes to make informed decisions at the polls.