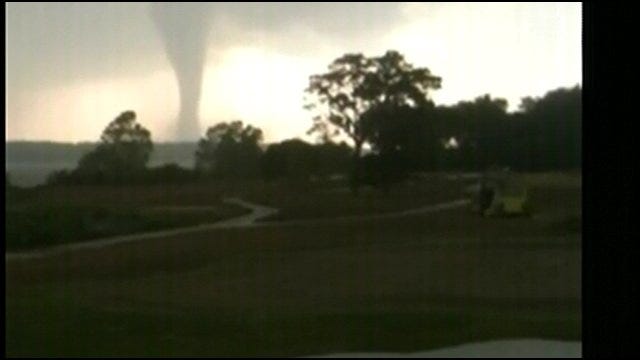 MONKEY ISLAND, Oklahoma -- Bill Howell says he'd never seen a tornado before Sunday, May 23, 2011.  He hopes he never sees another one.

Bill and his wife had just returned home from a trip to Dallas when they turned on the News On 6 newscast Sunday afternoon and saw the warnings about a thunderstorm near their place on Grand Lake.

They stepped outside and saw a tornado coming right at them.  They took some still photos before Bill's wife told him to shoot video with his iPhone.  As amazing as the video is, Bill says it doesn't do the storm justice.  He says the waterspout was much bigger than it looks on video.

Bill told his wife to get into the bathtub and put some dog beds over her, but he stayed on the deck shooting video of the storm.  As it crossed onto the lake it became a waterspout, and Bill kept shooting for about three minutes as the storm came right at him.

He says the video ends when he started running for cover.  A few seconds later, the spout made a right turn, dissipated a bit, and headed toward Grove.

Bill says neither he nor his wife was hurt and they didn't suffer any property damage.