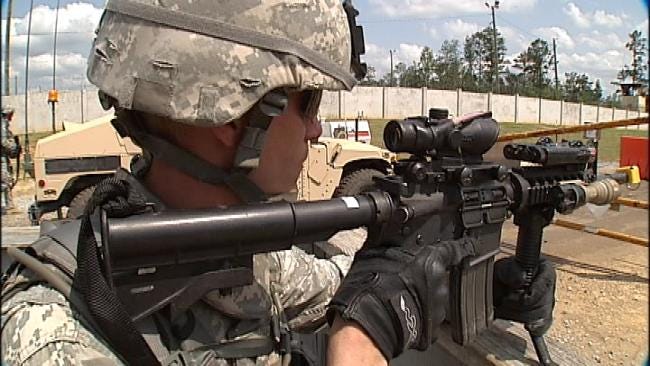 According to a news release from the Oklahoma Military Department, 448 soldiers were told this week they may be going to Afghanistan, Iraq and the Horn of Africa. The majority of them are from units based in Okmulgee, Okemah and Muskogee.

"These notifications aren't really a surprise to those serving in the Oklahoma National Guard," said Lt. Col. Max Moss, a National Guard spokesman. "No one knows better than a Guardsmen or a Guard family that deployments are a reality. The notification marks the beginning of training and equipping phases that will ensure our men and women are prepared to accomplish their mission, wherever that might be."

This call-up is in addition to the 3,200 soldiers who are members of the 45th and are already in Louisiana and Mississippi preparing for a deployment to Afghanistan.

Photojournalist Todd Ruffin and News On 6 anchor Craig Day went to Camp Shelby down in Hattiesburg, Mississippi to meet up with the Oklahoma soldiers in the 45th during their training.

That special report airs next Wednesday on the News On 6.