Oklahoma Soldiers Training In Mississippi Before Heading To Afghanistan 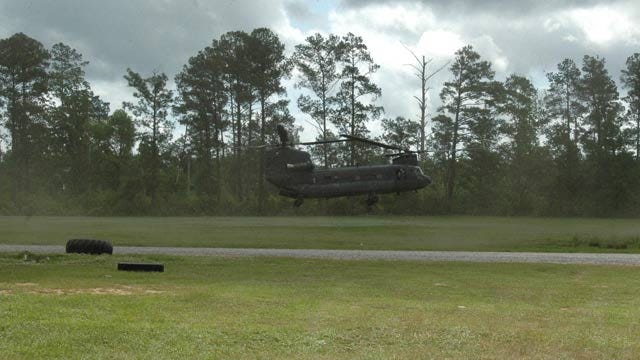 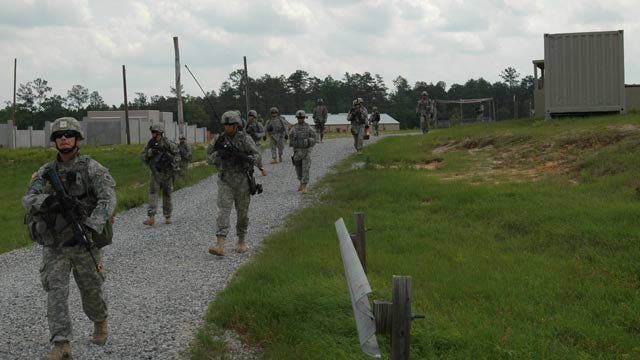 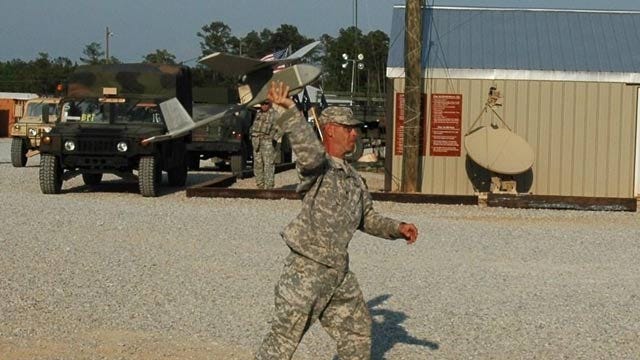 During the FTX there are mini battles, key leader engagements, patrols, and medical evacuation missions. The missions involve carefully planned scenarios that challenge each soldier's skills. These scenarios are unpredictable and often are designed to be more difficult than missions the unit might receive while deployed. This type of training sharpens individual soldiers' skills, as well as the leaders who are given the task of planning the mission.

Planning the mission also requires logistics to be taken into consideration. This includes vehicle communication with the tactical operations center while on patrol, using interpreters, and a reconnaissance of the areas that would be suitable should a medical evacuation be required. Through this planning the unit better ensures mission success.

Lt. Col. Nicholas Joslin, commander of the 2-410th Field Artillery (FA) Battalion, 177th Armored Brigade, summed up the FTX as the capstone of all the training a unit conducts prior to deployment.

"The idea is that these training events provide the 45th IBCT the opportunity to use all the skills they have learned in the individual and small unit collective training," said Joslin.

Up until the field training exercise, the unit's training had been very structured and the training requirements have been dictated to the unit.

Capt. Patrick O'Brien, officer in charge of the FTX lane, 2-410th FA explained the free-play training environment as giving the unit's command the flexibility to do what they want, when they want, with the conditions for events set by the trainer mentors.

"We in the 2-410th FA set the conditions for events to happen," said O'Brien. "Although events are planned such as roadside bombs, when the unit does the right thing they will not be hit. This creates positive re-enforcement."

O'Brien also explained that there are scenarios that will happen, such as ambushes and roadside bombs, regardless of what the unit does. This is to challenge the leaders and soldiers, but everything in the exercise is directly linked to how the unit reacts.

During the free-play exercises, the unit has the opportunity to verify their own operating procedures. Free-play exercise also allows them to realize, in training, any shortfalls they may have. In addition, the FTX shows a unit the worst-case scenario and allows soldiers to begin to develop ways to cope with the hardships that come with being in a combat environment.

Sgt. 1st Class Robert Wilson, A Battery 2-410th FA, summed up the field training exercise as "a bunch of culminating training events that prepare soldiers for combat operations, ensuring they come home. That is what it is all about."

While soldiers are not on missions during the FTX, they have time to work on their individual skill sets such as being part of a Raven flight team. The Raven is an unmanned aerial vehicle that allows a unit to fly reconnaissance in front of a convoy or to check an area before soldiers move in.

"Down time is up time for us," said Knight, who is from Stillwater, Okla. "Airtime allows us to experiment with different wind and altitude adjustments. It is important to know our job because it can be the difference between a patrol coming home or not."

The 177th Armored Brigade trains, coaches and mentors soldiers, airmen and sailors in support of our nation's overseas contingency operations. The majority of the work at the 177th is with mobilized Army reserve component forces, although they also train active forces.

The brigade is stationed at Camp Shelby Joint Forces Training Center at Camp Shelby, Miss., which is the largest and most active mobilization training center in the U.S. Army.

Oklahoma Soldiers Training In Mississippi Before Heading To Afghanistan