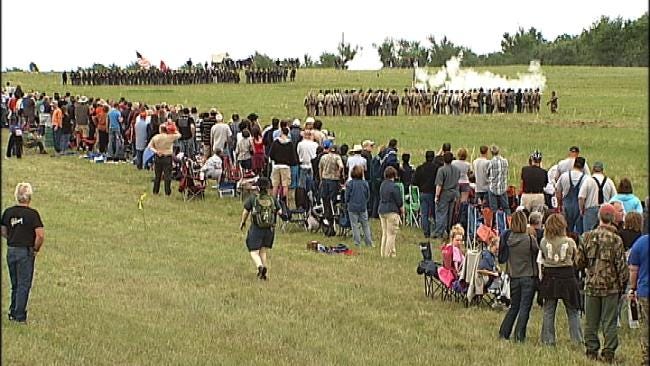 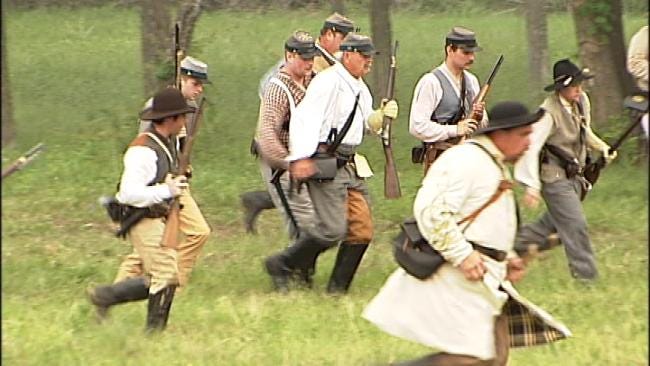 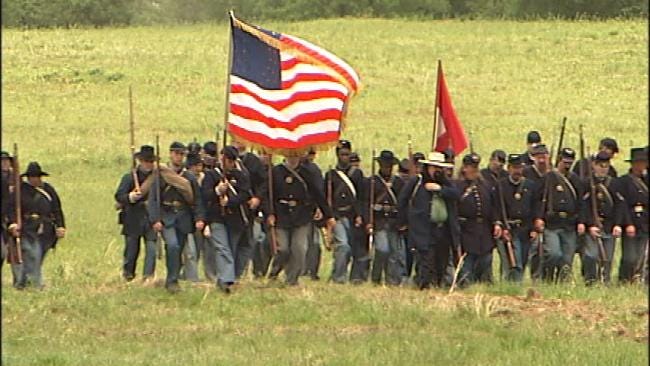 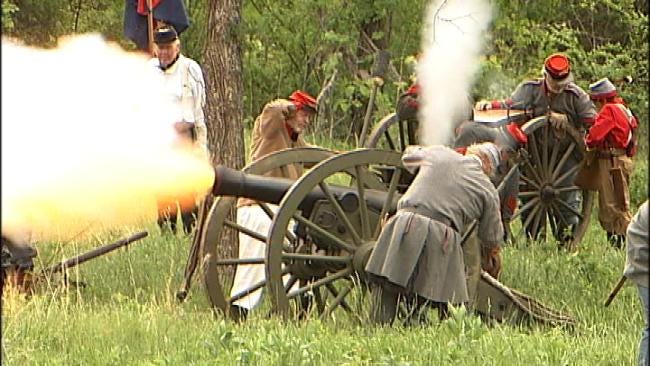 MCINTOSH COUNTY, Oklahoma -- The sounds of gunshots echoed for miles as soldier's resurrected history. This year marks the 150th anniversary of the Civil War, a time when our nation ripped in two, and it seemed almost impossible to repair the wounds.

A battle to the death as both sides fought to control every corner of the country, including what was then "Indian Territory."

The turning point was two years after the Civil War began back in 1863.

Sounding the trumpets of war-- it's North versus South. A deadly fight for Indian Territory and its lucrative trade routes, culminating in what's now the town of Rentiesville where Union soldiers took the lead.

"They did a surprise attack on them here at Honey Springs," Arthur Street, Reenactor. "Try and choke the necks, starve the South."

"Confederates powder got wet so they weren't able to do much actual gun fighting. It reverted to hand-to-hand combat," Street said.

The Union won the battle and Indian Territory, But not before hundreds of soldiers on both sides gave their lives.

"We're just kind of observing the colonials blast each other apart," Street said.

Of course, these soldiers won't actually lose their lives. Instead, they're experiencing what they call living history. Not just reenacting the battle but camping out just like Civil War soldiers using the same tools they used more than 150 years ago.

"Give them a feeling of how people actually lived," said reenactor Horace Lindley.

And back then, anyone watching from the sidelines was probably armed with weapons, not a digital camera.

"We try to be as accurate as possible. All these are new but they're made to military specs. It's as close as we can get. Undergarments and everything," Lindley said.

"I find this far more interesting, learning about history in this environment than learning about it sitting in a classroom," said reenactor Bruce Fisher.

"Why not let's take these runaway slaves, give them guns, give them uniforms and let them fight for their own freedom," Fisher said

Making Oklahoma prairies the front lines of freedom we take for granted today, but certainly didn't come for free.

Tactics used at the Battle of Honey Springs are still studied by soldiers at West Point. It was just one of 107 documented hostile encounters in Indian Territory.

For more information about the 150th anniversary of the Civil War in Oklahoma and the Battle of Honey Springs reenactment, go to the Oklahoma Civil War Sesquicentennial Commission website.