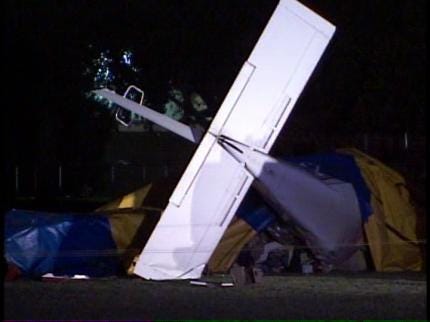 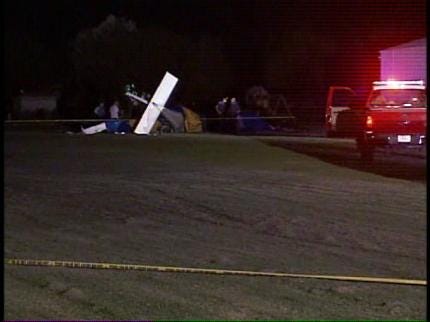 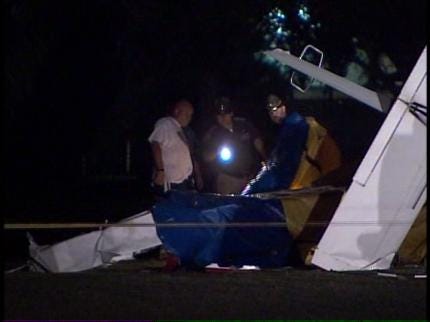 OWASSO, OK -- The Oklahoma Highway Patrol says three men died Sunday evening when the small airplane they were in, crashed about 100 yards from runway at an Owasso airport.

The OHP says the men have been identified as 64-year old Richard Shimer of Owasso, 55-year old Lonnie Hardin and 53-year old Joseph Provenzano, both of Tulsa.  Shimer was the pilot.

The Oklahoma Highway Patrol says at about 8:15 p.m. the plane was flying eastbound heading to Gundy's Airport at 76st Street North and 177th East Avenue and for some unknown reason, nose dived into the ground short of the airport's runway.

"We spoke with a couple of local residents who were witnesses. They stated they heard, what they thought they heard was the engine of the plane. Another witness said they definitely did not hear it," said OHP Lt. George Brown.

It was second airplane crash in the Tulsa area this weekend.

The OHP says the Cessna twin engine plane went down in a heavily wooded area of the park.

The three people aboard this plane were executives at U.S. Highland, a motocross motorcycle manufacturer in Glenpool.  They have been identified as 41-year-old Mats Malmberg, 51-year-old Chase Bales and 37-Year old Damian Riddoch.

The FAA and NTSB are investigating both crashes.