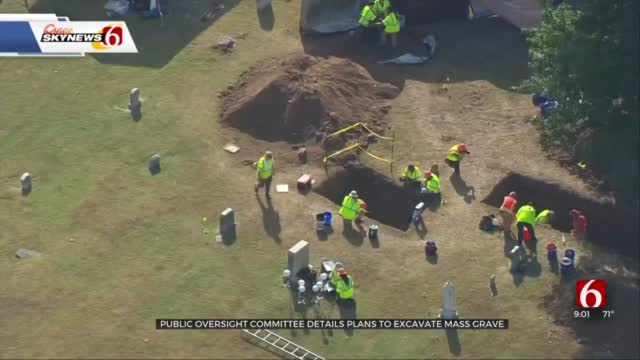 At a Public Oversight Committee meeting for the 1921 Tulsa Race Massacre Graves Investigation, the City of Tulsa said plans are moving forward for excavation work at Oaklawn Cemetery to begin on June 1st, which will mark 100 years since the massacre.

It could take weeks or months to analyze the remains found in a mass grave discovered last October.

During the virtual meeting Thursday, the city said it received responses from nine archeological firms that are interested in helping with the work. The city will choose one to help the current archaeologists on the team.

Deputy Mayor Amy Brown the necessary paperwork involved with removing human remains from the ground has been turned in to the Oklahoma State Department of Health for review.

OSU Center for Health Sciences Professor Dr. Robert Allen presented an in-depth look at what DNA analysis could look like.

At next month's meeting a judge will join the discussion to talk with the public oversight committee about legal work, and answer questions about any potential for criminal prosecution in connection to the work being done in the investigation.