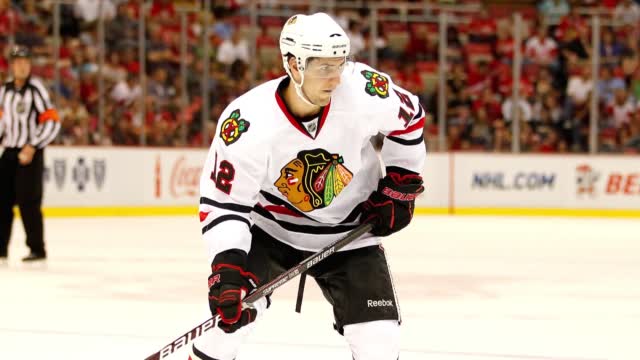 On Tuesday, Blackhawks president of hockey operations and general manager Stan Bowman announced he had "stepped aside" after an independent investigation determined he and other team executives failed to promptly investigate the former player's claims that he was sexually assaulted by a video coach in 2010.

"We and he ultimately accept that, in his first year as general manager, he made a mistake, alongside our other senior executives at the time, and did not take adequate action in 2010," team CEO Danny Wirtz announced Tuesday afternoon.

Bowman also resigned as the general manager of the 2022 U.S. Olympic Men's Ice Hockey Team. Also out over the Blackhawks' handling of the scandal is senior vice president Al MacIsaac.

Beach said he had "a great feeling of relief vindication and it was no longer my word against everyone else's."

Beach is now playing in Erfurt, Germany for a team called the Black Dragons. He was a Blackhawks first-round draft pick in 2008.

He told TSN that in 2010, he had just finished his junior season with the Spokane Chiefs and had been called up by the AHL's Rockford Ice Hogs. That team in turn lost the first round of the playoffs, and Beach said he and several others were called up to the Blackhawks as practice players.

"I think anytime you get that phone call, you're going up – whether it's to play or to be a practice player. But to be a part of that for the first time besides a training camp, it was an extremely special moment for me and for my family and the next step for me pursuing my NHL dream that I dreamed about and worked for my entire life," Beach told TSN. "So unfortunately, a couple weeks after, those memories were tainted, and my life was changed forever."

Beach was 20 at the time, and said he was "scared" and "fearful" following the alleged abuse.

"I would never dream, or you could never imagine being put in this situation by somebody who's supposed to be there to help you and to make you a better hockey player and a better person and continue to build your career," he told TSN. "Just scared and alone with no idea what to do."

Beach told TSN the first person he told was then-Blackhawks skills coach Paul Vincent while traveling with the team. Beach credited Vincent with trying to do everything he could when the allegations of abuse first surfaced.

"My mom cried for days," he said. "She felt responsible, like she should have protected me and there was nothing could do."

Meanwhile, Aldrich got a front row seat to the party when the Blackhawks won the Stanley Cup in 2010. He got to bring the cup to his hometown, was paid a playoff bonus, and attended the banner-raising ceremony at the United Center.

But according to the comprehensive four-month investigation by an independent law firm, Blackhawks management by then was already well aware of the sexual assault allegations made by the man now identified as Beach.

"It is clear that in 2010, the executives of this organization put team performance above all else," said Wirtz, the Blackhawks CEO. "John Doe deserves better from the Blackhawks."

Former federal prosecutor Reid Schar, who conducted the independent probe after Beach sued the Blackhawks in May, said the investigation determined that both the former player and Aldrich agreed they had a sexual encounter in May of 2010 but while Beach insisted it was entirely non-consensual, Aldrich maintains it was entirely consensual.

Schar said Bowman and other senior executives failed to promptly conduct a thorough investigation, adding that several Blackhawks executives and coaches held a meeting within an hour of clinching the Western Conference title to secure a spot in the Stanley Cup Final to talk about the allegations against Aldrich, but no action was taken for three weeks.

Aldrich went on to plead guilty in 2013 to misdemeanor criminal sexual conduct with a former Michigan high school hockey player who has also sued the Blackhawks for negligence.

TSN asked Beach about that later allegation, and Beach was tearful when he talked about it.

"I'm sorry. I'm sorry I didn't do more, when I could, to make sure it didn't happen to him. To protect him," Beach said of the Michigan victim. "But I also wanted to say thank you to him. Because when I decided, after a teammate asked me about it when I was playing overseas, and I decided to Google Brad Aldrich's name and that's when I found out about the Michigan individual, the Michigan team. And because of what happened to him, it gave me the power and the sense of urgency to take action, to make sure it didn't happen to anybody else."

Beach said he thinks "the step the Blackhawks took yesterday is a great step in the right direction. "They accepted accountability and they took actions necessary, albeit too late."

Of the executives and coaches at the June 2010 meeting, former assistant GM Kevin Cheveldayoff and former head coach Joel Quenneville are the only ones currently employed by the NHL – Cheveldayoff as GM of the Winnipeg Jets and Quenneville as head coach of the Florida Panthers – and the league plans to meet with them regarding the investigation's findings.

Beach blamed the NHL as a whole for failing him.

"The NHL is inclusive; the NHL includes everybody. And they let me down and they've let down others as well. But they continue to try and protect their name over the health and the well-being of the people who put their lives on the line every day to make the NHL what it is," he said.

The Blackhawks released a statement late Wednesday after Beach identified himself:

"First, we would like to acknowledge and commend Kyle Beach's courage in coming forward. As an organization, the Chicago Blackhawks reiterate our deepest apologies to him for what he has gone through and for the organization's failure to promptly respond when he bravely brought this matter to light in 2010. It was inexcusable for the then-executives of the Blackhawks organization to delay taking action regarding the reported sexual misconduct. No playoff game or championship is more important than protecting our players and staff from predatory behavior.

The Blackhawks have implemented numerous changes and improvements within the organization, including hiring a new leadership team that is committed to winning championships while adhering to the highest ethical, professional, and athletic standards."

Emory Bryan Two escaped inmates are back in jail Monday after a manhunt that lasted the weekend in Rogers County.

Emory Bryan Two escaped inmates are back in jail Monday after a manhunt that lasted the weekend in Rogers County.
View More Stories

Emory Bryan Two escaped inmates are back in jail Monday after a manhunt that lasted the weekend in Rogers County.

Amy Slanchik The Pride of Broken Arrow won a national band competition and broke the record for the highest score ever in the "Bands of America" competition this weekend.

Associated Press President Joe Biden signed his hard-fought $1 trillion infrastructure deal into law Monday before a bipartisan, celebratory crowd on the White House lawn, declaring that the new infusion of cash for roads, bridges, ports and more is going to make life “change for the better” for the American people.
View More Stories

Augusta McDonnell News 9 interviewed law enforcement who were there the day of the double homicide that put Grant in prison.

Associated Press Someone opened fire at a high school north of Detroit on Tuesday and shot four to six people, though none were confirmed dead, authorities said.

Congressional Leaders Race Against The Clock To Fund Federal Government

Alex Cameron Congressional leaders are in a race against the clock to approve another short-term funding measure and avoid a partial shutdown of the federal government. A September deal to continue funding the government at Fiscal Year 2021 levels expires Friday at midnight.

Ashlyn Brothers The Tulsa Girls' Home is finalizing its plans over the holidays before opening its doors to eight Oklahoma girls in foster care this winter.

News On 6 Emergency crews are on the scene after a man crashed into a home near 31st and Garnett on Tuesday afternoon.