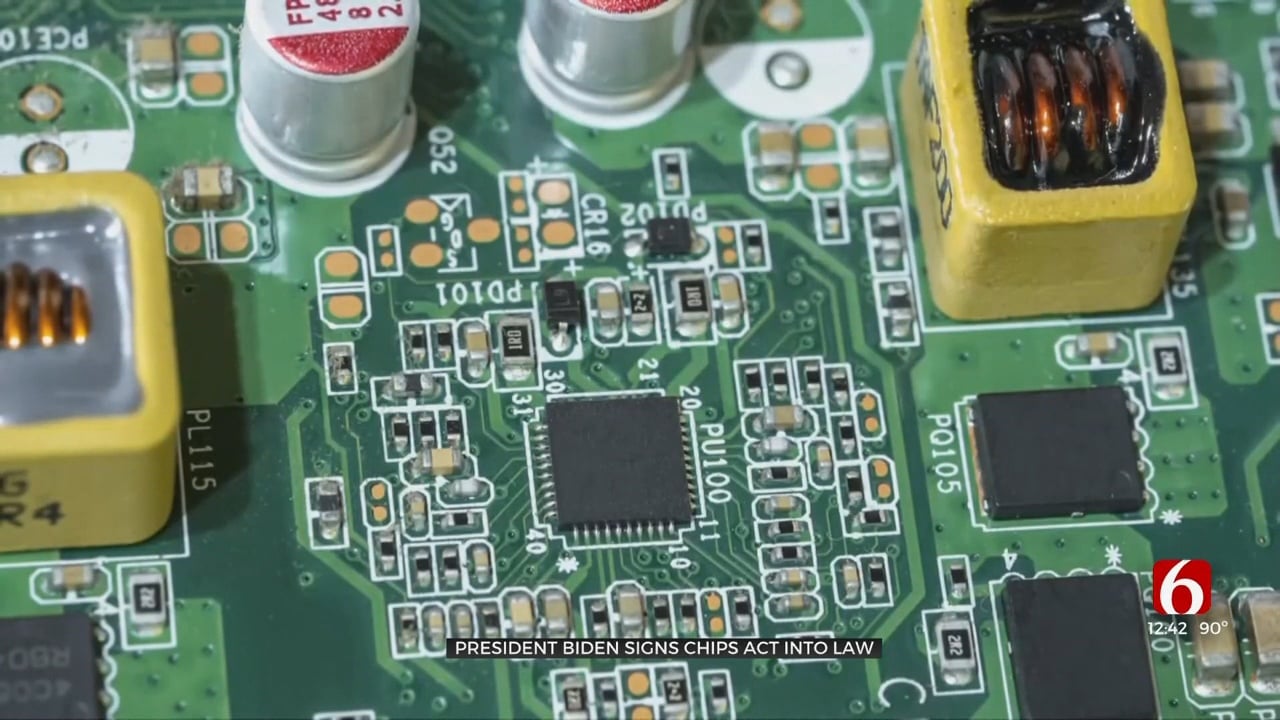 President Biden on Tuesday signed into law a bill known as the Chips and Science Act, providing more than $200 billion to boost domestic production of semiconductor computer chips and reduce U.S. reliance on overseas manufacturing of the components that power nearly all facets of modern technology.

The bill passed both chambers of Congress last month with bipartisan support following months of negotiations. The legislation was a top priority for the Biden administration, with top officials warning lawmakers ahead of its passage that failure to act would have implications for national security and the economy.

"We know there are those who focus more on seeking power than securing the future, those who seek division instead of strength and unity, who tear down rather than build up," Mr. Biden said during a ceremony on the South Lawn of the White House. "Today's a day for builders. Today, America is delivering."

Congressional leaders, representatives from the private sector and state and local elected officials attended the event marking enactment of the measure. Among those in attendance were the heads of Intel, HP and Lockheed Martin, the governors of Illinois and Pennsylvania, and mayors from Ohio, Michigan, Texas, Idaho and Utah, according to a White House official.

Mr. Biden said those assembled "represent why we are better positioned than any other nation in the world to win the economic competition in the 21st century."

"We can channel all our resources. Most of all we can channel the full talents of all our people, and their greater measure of hope and opportunity for our nation and for the world," he said. "To create good jobs, empower workers, grow the economy — not just for the wealthy, but grow for everyone." The president noted that the U.S. accounts for less than 10% of global production of semiconductors, representing a steep drop over the last 30 years as manufacturing moved overseas.

"American manufacturing is the backbone of our economy, and it was hollowed out," Mr. Biden said through a persistent cough, speaking just two days after he was cleared from isolation due to a bout of COVID-19. "We let semiconductor manufacturing go overseas, and as a result, today, we barely produce 10% of semiconductors, despite being a leader in chip design, as well as research."

Ahead of the bill signing, the White House promoted what it said is nearly $50 billion in additional investments in domestic semiconductor production that was prompted by approval of the legislation by Congress.

"The CHIPs and Science Act makes the smart investments so that American to compete in and win the future," the White House said in a fact sheet about the legislation.

The measure provides more than $52 billion in subsidies for U.S. semiconductors and roughly $24 billion in tax credits for new chip manufacturing facilities. It also includes billions of dollars for boosting investments in research and development and establishing regional innovation and technology hubs to create jobs and catalyze regional economic development.

The White House has touted the legislation as a win for the U.S. economy that will reduce the cost of cars, smartphones, consumer electronics and appliances, all of which are require chips.