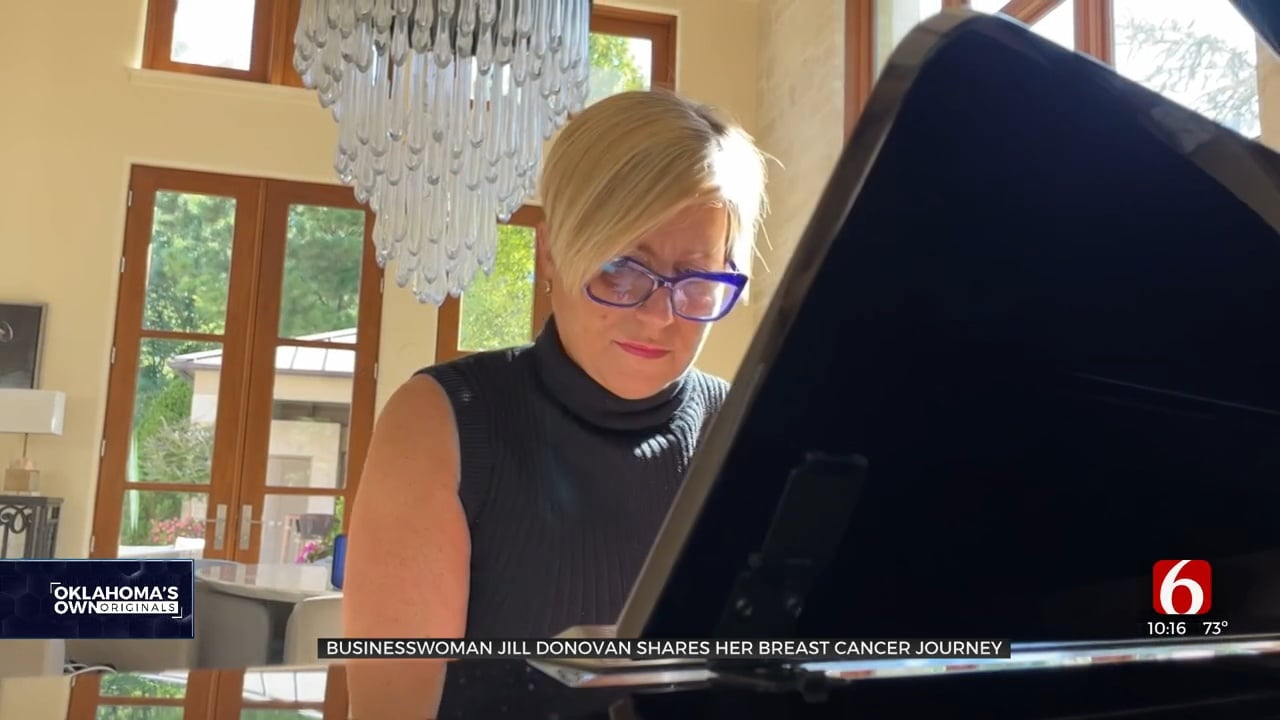 Jill Donovan loves to surround herself with music. Whether playing piano alone or accompanying her daughters, there seems to always be a song in her heart.

So last October, when she went in for her mammogram and her doctors found something, she said the strangest thing happened. She was sent a pink melodica in the mail. She took it as a sign.

"Whatever the outcome is of this, I'm going to take it that this pink melodica means, I'm supposed to continue to make music through this journey and so I played 'Amazing Grace' sitting there,” Jill said. “And the next morning at 9:30 I got the call that I had breast cancer."

Jill and her husband, Terry, were in shock, but Terry knew they had to look out for their two daughters.

"That was the biggest thing, keeping the family kind of functioning,” Terry said. “We still had school. We still had all the activities, we still had work to do. We had lots of things on the horizon so just keeping it in focus knowing that we had the season we had to come together as a team."

Jill and Terry have two teenage daughters, Ireland and Peanut.

"I remember we were all sitting down, and my mom was like, 'I have to tell you something,'” Peanut said. “She told us she had breast cancer, and I really didn't know what to think in the moment…It's just really shocking."

"When they told me… I had faith the Lord would bring her back to like her full and healthy self,” Ireland said. “I wasn't too worried, but I was just kind of in shock.”

"It makes you question, OK, am I going to get on the other side of this?” Jill recalled. “Will I come through the surgery? Will the treatment be effective?”

Jill underwent surgery and then 33 days of radiation. But she decided to, in her words, "reframe it' and invited a different co-worker from Rustic Cuff to go with her.

"I wasn't thinking about it as a treatment,” Jill remembered. “I was thinking about spending time with a friend every day during this lunch hour and that made all the difference, too."

"I felt joy because, first of all, all the people surrounding me, but it wasn't even so much that. It's just that I can't find the words that describe why my heart was at peace," Jill said.

When Jill is not at home with her husband and daughters, you can find her at the corporate headquarters of Rustic Cuff, with her second family.

Through her treatment, Jill kept busy with work surrounding herself with friends, like co-worker Kelly Smith.

"For the most part, she just attacked the whole thing with joy,” Smith said. “I mean from the very beginning and, which I don't know why I'm surprised, because that's how Jill is her whole life. It really marked the whole journey. She just decided to take something really hard and find the beautiful moments in it."

Over the years, Jill and her company have been supporters of organizations that help in the fight against cancer by providing cuffs to fundraisers and making financial donations.

"And little did I know that all of these seeds we've planted over the years would come back,” Jill said. “I mean all the seeds and all the money years ago now has been used for breast cancer research and now all of that is coming back to touch me."

“Here we are, someone who has championed all the causes in the cancer world and now we're sitting here, we're going to have a real-life story,” Terry said. “What does it feel like? She can connect with people on another level so I know that this would be another platform for her that God was going to be victorious through this and that the messaging that would come out of this would touch other lives in a new way."

Jill said while the diagnosis has changed her, it will not stop her from doing what she loves: spreading joy and making music.