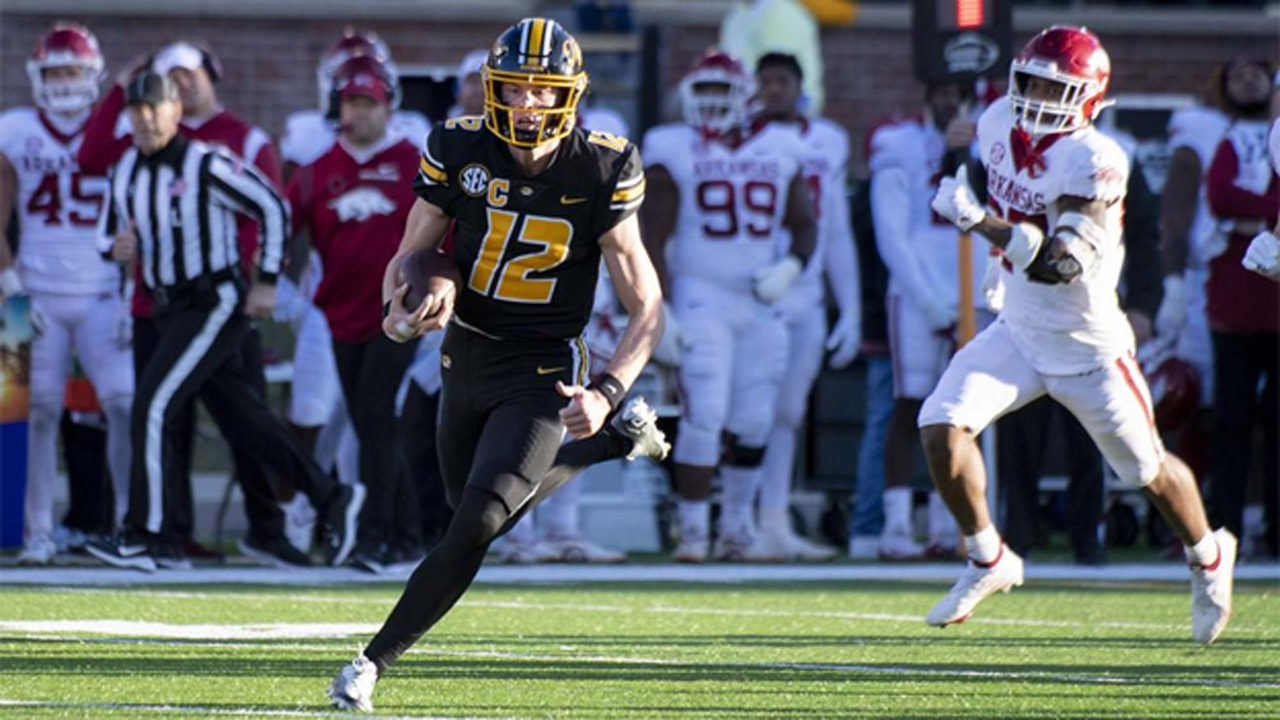 Missouri and Arkansas will be headed to similar bowl games after the Tigers held off the Razorbacks 29-27 on Friday night, leaving each of the bitter border rivals 6-6 on the season.

Only one walked out of Faurot Field with victory cigars. Brady Cook threw for 242 yards and a touchdown while running for 138 yards and a score, and Missouri’s defense stuffed Arkansas when it mattered in the fourth quarter, allowing the Tigers to avenge last year’s loss to the Razorbacks.

“We wanted it so bad,” admitted Missouri coach Eli Drinkwitz, who said he bought cigars for the entire team in anticipation of reaching bowl eligibility. “We tried not to make it bigger than it was, but we were playing for more.”

Cody Schrader added 97 yards rushing and a touchdown, and Dominic Lovett — who had to ditch his own lit cigar on the way to the postgame new conference — had six catches for 130 yards, helping the Tigers (6-6, 3-5) qualify for a third bowl game in Drinkwitz’s first three seasons in Columbia.

“We only won by two,” Lovett said after smacking the tobacco taste out of his mouth, “but a win’s a win. We got it done.”

Arkansas (6-6, 4-4) had the ball twice with less than 8 minutes left and a chance to drive for a go-ahead field goal, but the Tigers forced three-and-outs both times and essentially ran out the clock on their first league win in a month.

“We’ve all been through hell — can I say hell? Well, I just said it twice,” Lovett said. “It was a good day all around.”

The Razorbacks’ KJ Jefferson threw for 205 yards with two touchdowns and an interception while running for a score, though he was constantly harassed by Missouri’s aggressive defensive front. Raheim Sanders, the league’s second-leading rusher, was held to just 47 yards on the ground with a touchdown reception.

“We’ve got a very disappointed locker room right now and we’d certainly like to get this taste out of our mouth in a bowl game,” Razorbacks coach Sam Pittman said, “but this is going to be hard to get rid of.”

Missouri actually scored on each of its first four drives yet still trailed at halftime.

That’s because the Razorbacks were better at reaching the end zone.

While the Tigers got touchdown runs from Schrader and Cook to cap long drives, they also had to settle for a pair of field goals from Harrison Mevis, including a chip shot after a drive stalled at the Arkansas 10 late in the first half.

The Razorbacks were forced to punt twice, thanks to Missouri’s pass rush, but they also got a short TD run from Jefferson and his touchdown pass to Matt Landers. And when the Razorbacks got the ball back with 5 1/2 minutes before the break, they breezed 75 yards down field and Jefferson hit Sanders out of the backfield for a 21-20 lead.

Missouri regained the lead in the third quarter when Luther Burden III caught a short pass, put a move on the Razorbacks’ Quincey McAdoo, and reached the end zone from 23 yards out. And after Jefferson was picked off moments later, Mevis hit his third field goal to give the Tigers a 29-21 advantage.

The Razorbacks had a chance to retake the lead in the fourth quarter, after they’d closed to within 29-24, but they couldn’t get into the end zone after first-and-goal at the Missouri 2, and Pittman settled for another field goal. That wound up being the difference in the game.

“We felt like coming in here we were ready to go,” Pittman said, “and physically we just got whipped.”

Arkansas simply made too many mistakes to beat anyone in the SEC. The offensive line gave up seven sacks, penalty flags flew at costly times and Pittman’s conservative play on fourth down may have cost the Razorbacks the game.

Missouri’s defense made stops when it mattered the most, particularly in the fourth quarter. They stuffed Arkansas at the goal line, then forced consecutive three-and-outs in the waning minutes to essentially run out the clock.

Both teams await bowl destinations with the Tigers possibly jumping the Razorbacks in the pecking order. “Honestly,” Drinkwitz said, “I don’t give a crap where we play. It’s a bowl game, it’s a celebration. Wherever our administration thinks it’s best for us to go, we’ll saddle up and go.”