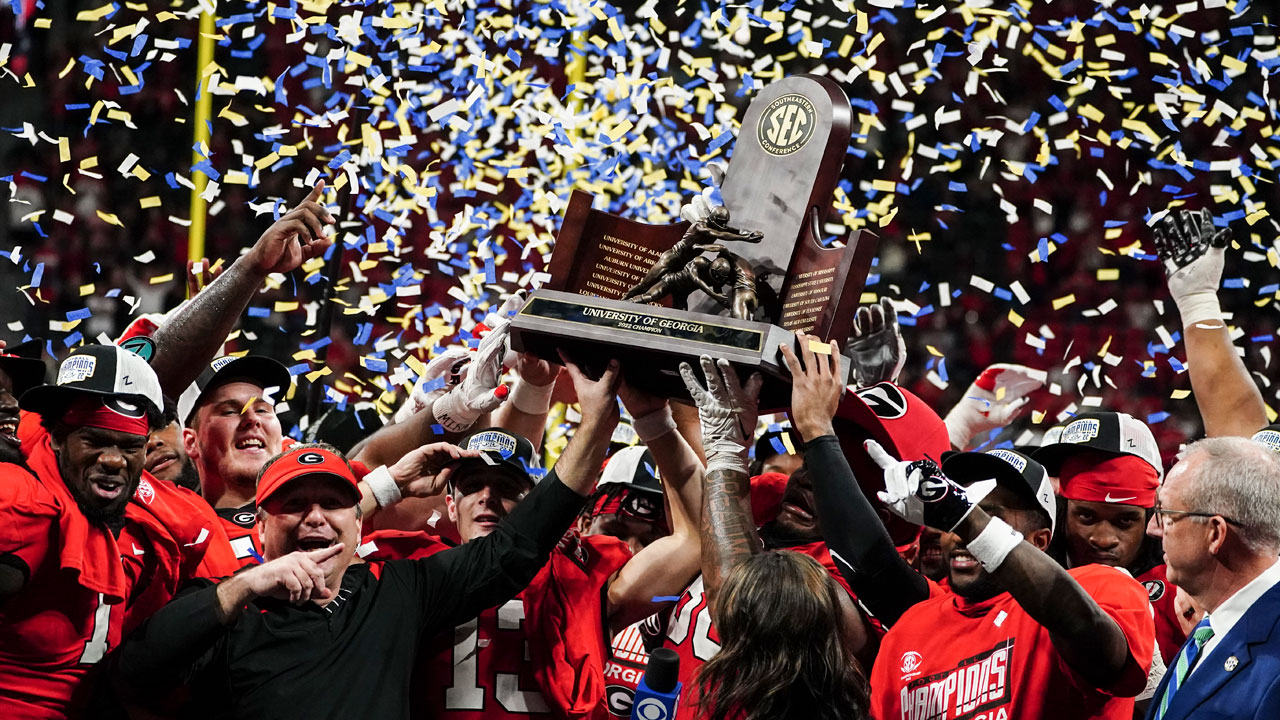 The four teams that will compete for the 2022-23 College Football Playoff have been decided.

After winning their first SEC championship since 2017 on Saturday night, the reigning national champion Georgia Bulldogs remained atop the pack as the No. 1 seed in the College Football Playoff as determined Sunday by the CFP Selection Committee. Georgia, 13-0 for the first time in program history, leads the four-team field as it looks to defend its national title and become the first back-to-back champions of the CFP era.

Michigan, which also sits 13-0 for the first time as the only other undefeated Power Five program this season, returns to the playoff for the second straight year as the No. 2 seed after a rousing win over Ohio State last week and a victory in the Big Ten Championship Game over Purdue.

Crashing the party this season is TCU (12-1), which fell in the Big 12 Championship Game but earned the No. 3 seed by virtue of its tremendous play and 12 straight wins to open the season. The Horned Frogs are just the second Big 12 team to ever reach the playoff in the postseason format's nine-year history and the first team from the Big 12 to do so without winning its league crown. They are also the first team to advance to the playoff after starting the season unranked in the AP Top 25.

Ohio State (11-1) slides back into the playoff despite sitting home during conference championship weekend. The Buckeyes enter at No. 4 with their lone loss coming to the Wolverines two weeks ago following an 11-0 start. That makes the Big Ten the just the second conference to put two members in the same playoff field; the SEC has done so twice previously. (Notre Dame made the 2020-21 playoff, along with Clemson, after playing an ACC schedule amid the COVID-19 pandemic, but it is not a permanent league member.)

Two SEC teams, Alabama (10-2) and Tennessee (10-2), are slotted just outside the four-team field in the fifth and sixth spots, respectively.

No. 1 Georgia will face No. 4 Ohio State in the Peach Bowl semifinal, which will be held in Atlanta on Dec. 31. No. 2 Michigan and No. 3 TCU will also meet on New Year's Eve in the Fiesta Bowl, which will be held in Glendale, Arizona. The 2022 CFP National Championship is set for Monday, Jan. 9 at SOFI Stadium in Inglewood, California.

Georgia is making its second straight playoff appearance and third overall. It has twice advanced out of the semifinals to the national championship and is 1-1 in those games.

Michigan is similarly making its second consecutive playoff appearance, and it hopes for a different outcome this time should it meet UGA again. The Wolverines have not won a national championship since 1997, one season prior to the formation of the BCS, meaning UM has never won a dedicated national title game.

Debuting in the playoff, TCU is seeking its first national championship since 1938. Horned Frogs coach Sonny Dykes is the third to lead a team to the CFP in Year 1 (Lincoln Riley with Oklahoma, Ryan Day with Ohio State), though he's the only coach to do so who was not elevated from a position on the prior coaching. TCU is the 14th team to play in the CFP.

Ohio State is by far the most experienced program in the field, making its fifth playoff appearance overall and third in the last four seasons. The Buckeyes won the initial CFP National Championship after the 2014 campaign but are just 1-3 in CFP games since.

Georgia is 1-0 all-time against Ohio State with their lone meeting coming in the 1993 Citrus Bowl (21-14), while TCU and Michigan have never met on the gridiron.

The playoff field may be set, but it's not the only thing going on this postseason. Check out CBS Sports' bowl projections as well as the entire 2022-23 bowl schedule.