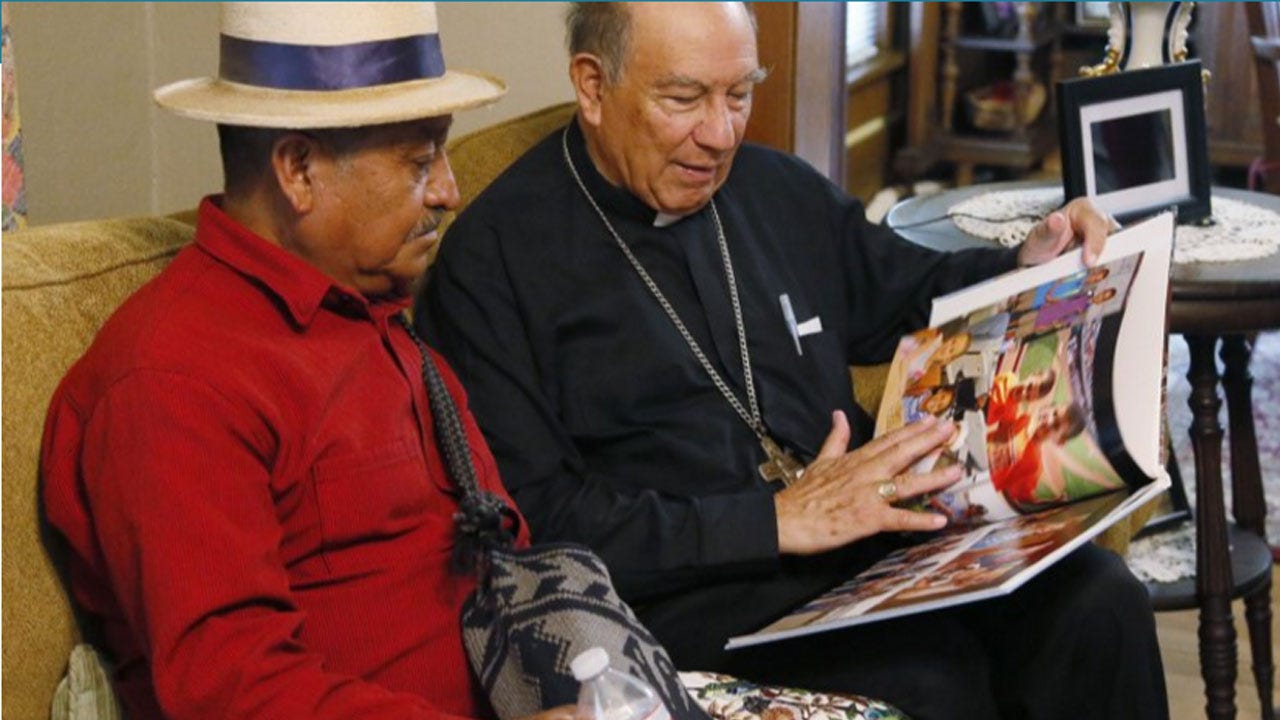 But the unusual destination of this 2,000-mile (3,218-kilometer) trek from Central America to a farmhouse outside a one-stoplight town seems an appropriate honor for the Rev. Stanley Rother, a martyred priest celebrated for his unassuming nature and hard work.

Rother is set to be beatified Saturday at Roman Catholic mass in Oklahoma City, moving him one step closer to possible sainthood. The ceremony is expected to draw thousands to a downtown convention center to honor the church’s first U.S.-born martyr and the first priest from the United States to be beatified.

The native of Okarche was a 46-year-old missionary in Guatemala when he was killed in 1981, one of several priests slain during the country’s civil war between a right-wing dictatorship and liberal guerrillas. His name first appeared on a death list, and then he was shot to death in his mission.

Juan Pablo Ixbalan made the journey from Guatemala with his fellow parishioners and church leaders to Rother’s childhood home. Setting foot in the house where Rother was born moved Ixbalan to tears, he said, and further sealed an inseparable connection.

“I feel like his brother — that we lived together, that we share the bond of brotherhood,” Ixbalan said in Tzutuhil, which is spoken by a subgroup of Mayans, through an interpreter. “He became one of us. He learned the language.”

Ixbalan, 63, was a young teen when he first met Rother at his church in Santiago Atitlan, situated on a lakeshore between two volcanoes in the Guatemalan highlands where he grew up.

Rother started a radio station, worked alongside farmers and pushed for locals to make and sell knitted clothing. In helping translate the New Testament, Rother is credited with helping start the written form of Tzutuhil.

Language wasn’t always Rother’s strong suite. Early on in seminary, he got a “Cs” and “Ds”, respectively, in Latin and English. Family lore tells that when Rother told his father he was going to become a priest, the elder Rother joked that he shouldn’t have avoided Latin in high school.

But farm work came with ease, and it served the eldest of the five Rother children well in Guatemala. He helped install an irrigation system and brought in crops such as wheat and soybeans, dissuading farmers from using chemicals. He brought in tractors to till the land, and repaired vehicles when they broke down.

Rother was born in 1935, a descendent of German immigrants who homesteaded on the outskirts of Okarche, about 40 miles (64 kilometers) northwest of Oklahoma City. While much of the state remains largely protestant, Okarche — population 1,300 — has held to its Catholic heritage. It’s still home to the Holy Trinity Church and school Rother attended.

Although the beatification ceremony is in Oklahoma City, it’s been felt in Rother’s hometown. The delegation from Guatemala stopped for lunch at Esichen’s Bar, which bills itself as Oklahoma’s oldest bar, but is best known for selling whole fried chickens.

Julie Kroener’s family has owned the Okarche establishment for five generations. She was a child when Rother died, but she said grew up respecting him and his family.

“This is a huge deal, and it’s an amazing thing to experience,” Kroene said Friday, just after the lunch rush. “It gives you a sense of pride knowing that somebody like that comes from such a simple town.”

The Archdiocese of Oklahoma City, a sponsor of Rother’s mission to Guatemala, opened his cause for beatification in 2007. Pope Francis declared Rother a martyr in December, and beatification is a step closer to potential sainthood. Francis, the first Latin American head of the church, has said priests killed during the region’s right-wing dictatorships died out of hatred for their faith.

Regular candidates for beatification need a Vatican-certified miracle attributed to their intercession, but the church makes an exception for martyrs. A miracle is still necessary to be declared a saint.

Writer Maria Ruiz Scaperlanda penned a 2015 biography of Rother and helped submit paperwork that could lead to his sainthood. She said Rother’s life became extraordinary because of his compassion and ability to help people carry on the everyday activities of life.

“This guy could fix the tractors. He could work the land,” she said. “I love that he’s from Okarche, Oklahoma. It doesn’t get better than that.”