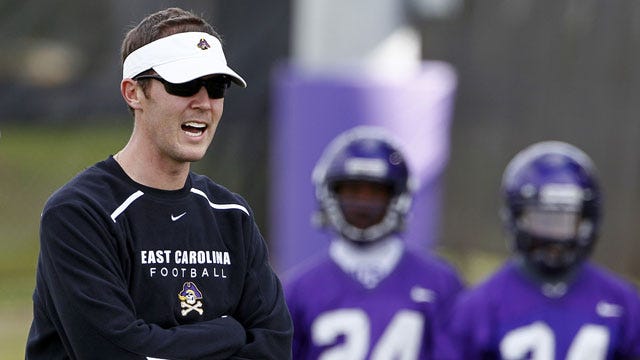 Sources confirm that OU plans to name Lincoln Riley as its new play-caller and offensive coordinator. Riley has helped set records at East Carolina as the coordinator and quarterbacks coach the past five seasons. It's a clear sign Bob Stoops is going back to the Hal Mumme/Mike Leach “Air Raid” style of attack that OU ran in the beginning of the Stoops Era (1999 under offensive coordinator Mike Leach). I'm told OU will emphasize getting its talented running backs in space in the attack and that Riley's success and experience of play-calling helped him become Oklahoma's choice.

I'm told Mike Leach and Hal Mumme gave rave reviews of Riley, who was a walk-on quarterback at Texas Tech and spent seven seasons in the Tech system. The 31-year old Riley is expected to be named OU co-offensive coordinator, play caller and QB coach in the near future. It's expected that Stoops will immediately focus on naming a wide receivers coach, and that Riley's input would be considered. Stoops announced last week that his co-coordinators Josh Heupel and Jay Norvell were not returning to the OU staff following the 8-5 season in 2014.

The Leach-style of offense continues to thrive, although Oklahoma has wandered from it. Statistically, six of the top 13 offenses nationally come from this attack, including: TCU, East Carolina, Washington State, Texas Tech, West Virginia and Cal.

Riley's impact at East Carolina under Head Coach Ruffin McNeal has been record-shattering. His offensive units rank No. 1, No. 2, No. 3 No. 4 and No. 5 on ECU's single-season passing list. In addition, four of his five squads are listed first, second, third and fourth on the school's yearly total offense ledgers, including a recent record-breaking 6,086-yard compilation in 2013.

Riley's first fall in Greenville installing and directing a new up-tempo spread offensive scheme resulted in 29 team or individual school offensive standards, and he followed that up with 27 more three years later that played a role in ECU's first bowl victory since 2007.

The decision Bob Stoops is making to go back to the back to this base offense should help both on the field and with consistency in recruiting. Certainly, having one base offense to build around is better than the combo-platter run last year when, partly because of injuries, Heupel ran variations of the zone-read, four and five-wide, Pistol, shotgun, pocket drop back, I-formation, power, and triple option.

One FBS defensive coordinator tells me Sunday night that he's heard good things about Riley. He believes if OU "stays with the Leach-Mumme system it would help their QB/RB/WR s and protection schemes. Small menu. Big Understanding. Always helps,” he says.

First take would make me think Baker Mayfield would have the inside track at being the 2015 starter. Mayfield has FBS experience, has proven on the practice field with DGB and the OU scout team that he can do some special things throwing the ball, and he is more experienced than any of the other three—except Trevor Knight. While Mayfield is more suited to zone-read and duel-threat systems, he should not be undersold.

Gotta wonder if Joe Mixon could find a way to get on the field and in space in this system instead of having to wait to share reps with Samaje Perine and the reps any other of the proven backs get. If I'm Lincoln Riley, I'm drawing on napkins in North Carolina tonight.