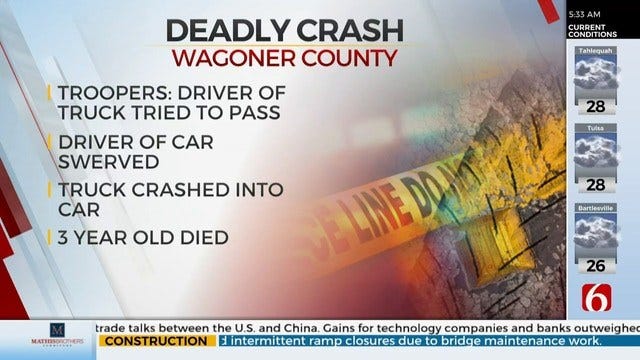 A toddler is dead following a crash in Wagoner County Monday.

An Oklahoma Highway Patrol report said the crash was caused by a driver who tried to pass without sufficient clearance.

The OHP report said when the teenager tried to pass the truck and trailer, a car going in the opposite direction took an "evasive action swerving to the left."

The report said the teenager's truck crashed into the back passenger door of that car, which had two children inside.

A 3-year-old boy died on the scene and the 13-year-old girl was flown to a hospital. Troopers say the 30-year-old woman driving the car is from Haskell and was also taken to the hospital.

News On 6 is working to get an update on the condition of the woman and the 13-year-old girl.

Troopers said the 17-year-old driver is also from Haskell. He was taken to a hospital where he was treated and released.

The OHP report said everyone involved was wearing a seat-belt.